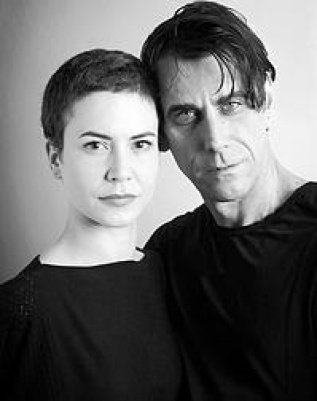 DYAD VI (Liquid – Solid)
A new chapter of VestAndPage’s current performance cycle Dyad on the danger of dichotomy, attachments to dualism, and the paradox of Ego, conceived for the occasion. Interested in what divides and separates us, and how divisions are applied socially and politically as mechanisms, VestAndPage here look into the ability to integrate again foreground with background, and content with context. Through a series of poetic bodily images, they question how dichotomies, polarity and dualism are being employed as effective tools of ideology, propaganda or collective manipulation. When “Individual” or “Atom” is that which cannot be cut or divided any further into separate parts, why are we still torn by schizophrenia? What if finally the Ego is not only useless, but a paradox that we continue to uphold only to confine ourselves? What if we really are just one part completing something else?

VestAndPage- duo of German artist Verena Stenke and Venetian artist and writer Andrea Pagnes which have been working together since 2006 in live performance, filmmaking and writing, and as independent curators. Their practice is contextual and conceived psycho-geographically in response to natural surroundings, social contexts, historical sites or architecture. In a poetics of relations it examines notions of perception, reality, communication, fragility and failure of the individual and the collective within social or environmental spheres. Their live works and art films have been produced and presented internationally. They are the initiators and independent curatorial force behind projects such as the live art exhibition project Venice International Performance Art Week. Their writings have been published in various books and magazines of contemporary art.