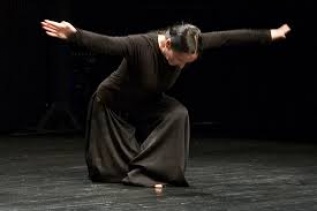 Jolanta Krukowska- (b. 1950) member of Akademia Ruchu from 1972, when it was founded. Akademia Ruchu is a theatre of visual narration, a visual sign that has been performing on stage as well as in open spaces of Europe, North and South America and Asia. Major venues: Documenta in Kassel 1987, Institute of Contemporary Art, London 1983, Ludwig Forum in Aachen 1990, PS 1 Museum in New York and Lace in Los Angeles 1992, Sagacho Gallery and Museum of Modern Art in Yokohama 1992, Performa in New York 2013.

From 1986 she also works individually as a performer, as well as leading theatre workshops in UK, Italy, Germany, USA, Australia, New Zealand. She considers theatre as a space which allows individual transcendence. “I am a woman. I am a cultural record of a woman. I am interested in this record. I am in a dialogue with it. Selected objects are my partners and pretexts to create metaphors. Relationships between me, object and spectator determine the lines of tension.”