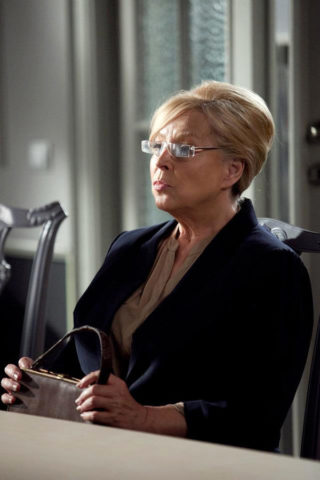 Jolanta Lothe is the daughter of actress Stanisławska-Lothe, with whom she appeared in the film „The Cruise” („Rejs”) directed by Marek Piwowskiego. She graduated The National Academy of Dramatic Art in Warsaw in 1966. She has performed on the stage in the Osterwa Theatre in Lublin, and later theatres in Warsaw: Classic, National, Small and Studio. Since 1989 she runs The Videotheater Poza (with her husband P. Lachmann). She was mostly cast in supporting roles that where very memorable and favorably recieved by the audience, for example in TV shows: „Doktor Ewa” (Doctor Eva) and „Polskie Drogi” (Polish Roads). She stared in movies such as: „Julia, Anna, Genowefa”, „Hunting Flies”, „The Deluge”, „Brunet wieczorową porą”, „Tylko umarły odpowie”, and „Brute”. For her role of Urszula Kurasiowa in “Polish roads” she was awarded by the Chairman for Radio and Television.