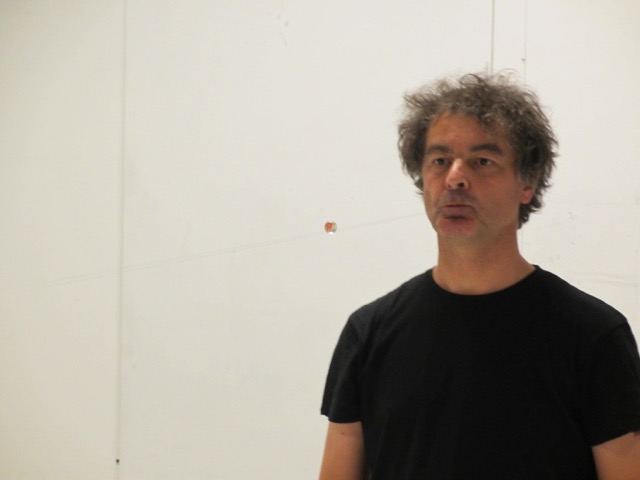 Brian Patterson is currently working as administrator and co-ordinator of projects for Bbeyond. He was involved in the setting up of Bbeyond in 2001 to promote performance art in Northern Ireland.

From 1998 he has worked with Flaxart Studios on their International Residency Programme, after a fire destroyed the studios in 2003 he devoted most of his time and energy to the relocation of the studios to a city centre location. Prior to this he worked on the management committee for Catalyst Arts from 1996-1998, an artist run organisation set up to promote an outlet for more innovative and experimental working practices.

He graduated in 1992 and since then has taken part in numerous group exhibitions where his main interest was installation work. In 2001 he was one of the artists involved in the Routes project, set up to promote the work of the unions in keeping sectarianism out of the work place in Northern Ireland. In May 2005 he made his first performance in Piotrkow Trybunalski, Poland.

In 2008, he instigated Performance Monthly meetings a monthly group participation of improvised performances. These regular improvised performances in public spaces have become a main feature of Bbeyond working practice and the idea behind Same Difference: Equinox to Equinox (2016), a worldwide call out for public performances that later resulted in a Symposium in Belfast, entitled, Being in Public | Encounters | Outer Place / Inner Space (2017).