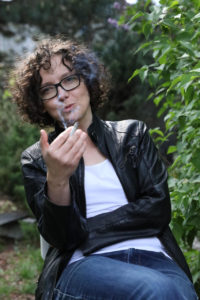 An experimental film about the textures, drawings and plasticity of the matter from which the animated and inanimate world is made, our bodies and all other bodies. About its flashes and deflections in the air. It is a film about the shapes of water and its states, which cannot be repeated, which in splashes and reflections happened only once, in the summer of 2020 in a certain garden in Wołomin.

In the nearby forest, meadow and grove, we will gather a handful of wild, edible plants, stems of fresh herbs, weeds, their stems and flowers, to cook a thick soup from them on a live fire, to feed on them, to pay homage to the United Kingdom of Plants, thanks to which animals and people live, sugar circulates in our blood and the air saturates oxygen, colouring the sky blue.

Urszula Zajączkowska, poetess, botanist, video artist. Assistant Professor at the Independent Department of Forest Botany of the Warsaw University of Life Sciences (SGGW), where she studies growth, movement, biomechanics and aerodynamics of plants. Author of the poetic volumes “Atoms”, nominated for the Wrocław Silesius Award and “minimum” awarded with the Kościelski Award (2017). In 2019, she published an essay book “Patyki, badyle” awarded with the Golden Rose (2019) by the Book Institute, and the Science Festival, nominated for the Polityka and Literary Award Gdynia Passports. Her film ‘Metamorphosis of Plants’ won first prize and audience award at Scinema (Australia) and Light Festival (USA). She publishes in dwutygodnik.com, Kwartalnik Przekrój, Pismo, Znak, Tygodnik Powszechny.  He lives in Wołomin.