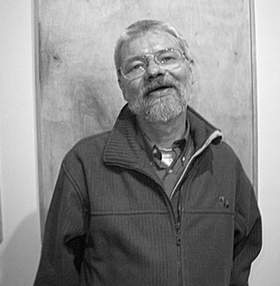 Lived and worked in Lublin (1955-2009), regularly presented by Andrzej Mroczek. Outsider in life and work. One of the most prominent artists, whose talent was based on combining photography with installation. Many of the installations he created himself, others discovered in reality. His photograph, in spite of being very sparse in realistic detail, almost abstract, are at all times poignant. It is hard to discern between typically sculptural activities and experimental photography in his work.

The most recognized of Mikołaj Smoczyński’s photographic cycles was created at the artist’s studio in Lublin between 1983 and 1992. It consists of black-and-white prints, showing an empty floor and an empty space where performances staged by the artist were registered. These atmospheric images allow us to enter the regions of unrestricted imagination. In spite of the title Smoczyński did not consider himself a performance artist. He said: “I never found in myself enough courage or the special kind of shamelessness that is  necessary to appear before an audience.” The word “performance” was used to signal the element of action inherent in the images. The word “secret” referred to the fact that his actions were undertaken just for the camera, experienced only by him. the photographs being the only evidence of their existence.