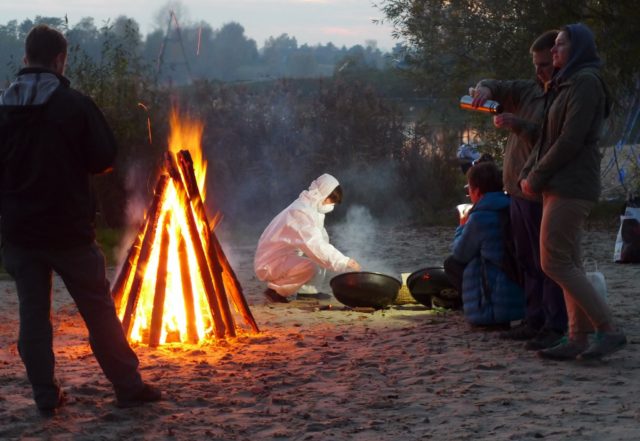 bio: Małgorzata Markiewicz lives and works in Kraków, Poland. A graduate of the sculpture department at the Fine Arts Academy in Kraków, she was awarded her PhD there in 2015, investigating ideas of home and gender roles within the domestic environment as her thesis.

Małgorzata Markiewicz’s artistic practice explores the complexity of contemporary gender dynamics within the context of the domestic environment, as well as in wider society. Working across sculpture, photography, textiles and performance, Markiewicz’s practice continues the legacy of the feminist avant-garde artists of the 1970s. She is represented by l’etrangere gallery, London.

It was very common to visit Sokołowsko (Goerbersdorf) when tuberculosis treatment was necessary. It was the first such sanatorium in the world where a climate and dietetic therapy was applied. Sokołowsko was even a model for famous Davos in which Thomas Mann set the action of the Magic Mountain. Tuberculosis, which is a mysterious disease of sensitive people, is widely described by Susan Sontag in the book Illness as Metaphor. Where we can read that it was believed that sadness and melancholy were conducive to the development of tuberculosis, this hypersensitivity and affectionate delicacy was characteristic of people who were artistically talented. At the same time, a patient suffering from tuberculosis had to leave his hometown to cure his illness, often was leading the life of a traveller, unrelated to mundane matters. Somehow the disease justified him or her. Tuberculosis makes people unique, aristocracy among the sick, outsiders of society. Being in a sanatorium exempted them from responsibility for the cares of everyday life. Similarly with artists, they dwell somewhere in between, having an alibi for their entire life because of their profession.

Currently, Sokołowsko serves artists and people connected with culture (sensitive ones) as a place of realizing their passions. A few days stay in Sokołowsko can be considered as a therapy through art when healing the body and senses. In Sokołowsko-SPA I am going to offer therapeutic sessions with the fire and resins, incense and herbs, every day after dusk. The event will be accompanied by fire. Just like Hans Castrop, when he was realxig according to a rigid therapeutic scheme we will do a bit the same.