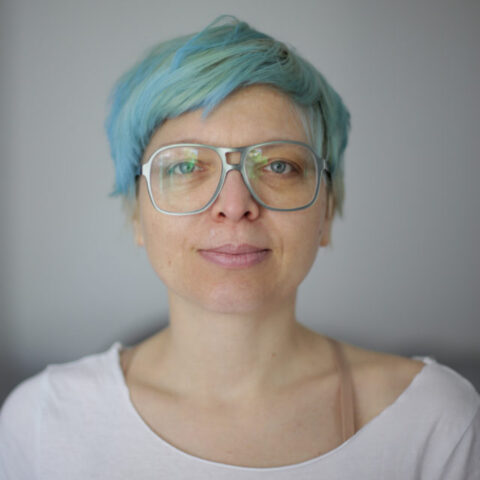 Karolina Breguła (b. 1979) – a visual artist, a graduate of the National Film School in Łódź. She creates films, photographs, installations and performative events. Her work explores the problems of the status of the artwork, the materiality of art objects. She critically scrutinises contemporary art and its reception. She creates stories about art and architecture, revealing social tensions hiding behind them. Many of her works are co-created with their protagonists and participants, blurring the border lines between professional and amateur artisitc activity. Her works have been exhibited at institutions such as National Museum in Warsaw, Jewish Museum in New York andMOCA Taipei and at the international events such as venice Art Biennale and Singapore Biennale. She is the winner of the second prize in the Views 2013 competition – Deutsche Bank Foundation Award, the third Samsung Art Master 2007 award or the 2016 Golden Claw at the Gdynia Film Festival. Her works are included in collections such as Tokyo Photographic Art Museum, Zachęta National Gallery of Art, Wroclaw Contemporary Museum and ING Polish Art Foundation. She is a lecturer at Academy of Art in Szczecin, she cooperates with lokal_30. Lives in Warsaw.

Dariusz Fodczuk (b. 1966 in Pisz) – visual artist and performer. He studied at the Maria Curie-Skłodowska University in Lublin and at the University of the Arts in Poznań. His activities refer to a sense of dignity and freedom, often taking a form of critical resistance to control in art, culture and its institutions. In his video works and installations he takes a stand on racism and anti-Semitism. In his recent activities he often addresses the subject of work as the basic element of the cognitive process. His works have been shown at over 200 festivals and group exhibitions and over 40 individual shows and exhibitions in Poland, Europe, North America and Asia. On a daily basis, he is an adjunct at the Media department of the Academy of Art in Szczecin. He also teaches esthetics at the University of Science and Technology in Kraków and runs a Guest Workshop at the Faculty of Art at the University of Ostrava in Czech Republic.