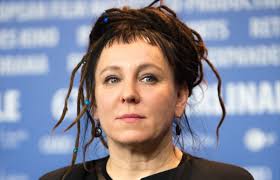 Olga Tokarczuk was interviewed by Marie Tetzlaff in August 2016 in connection with the Louisiana Literature festival in Denmark.