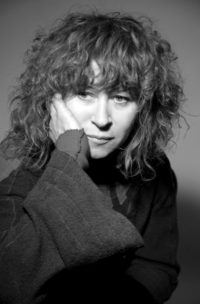 The Slovenian artist and film director Ema Kugler was born in Celje. Kugler graduated in economics at the University of Ljubljana. In the 80s she was active in the alternative scene in Ljubljana around the radio station Radio Študent. Initially, she was involved in performance art. In the 1990s, video began to dominate her work. Her video-films are made with great passion and low budget, which means that Ema Kugler also writes scripts, designs the film set, props and costumes. One could say, Kugler’s films are experimental Gesamtkunstwerke with unique Baroque aesthetics. Her films are a sophisticated interweaving of mythological themes, current political events, as well as images of social divisions and hierarchies. Ema Kugler has won many awards at film festivals in Europe and America. She was the first director in the history of Slovenia to be awarded the France Štiglic Award for the lifetime achievement by the Directors Guild of Slovenia in February 2020.