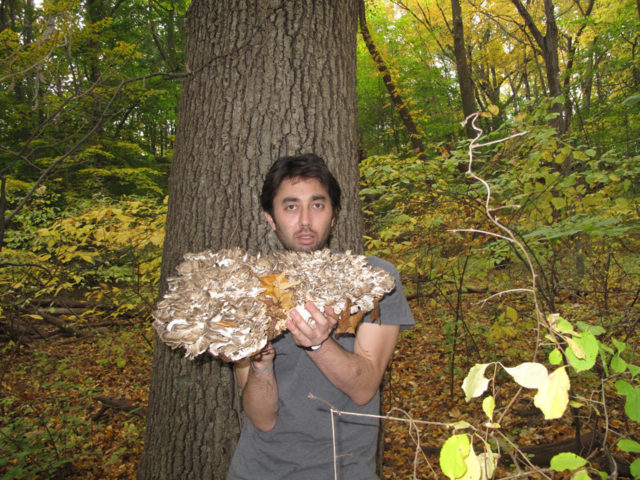 „Puddle Visualization” is a new audio piece by David Horvitz taking the form of a guided meditation. The spectator is invited to actively realise the work by following the instructions of the artist, starting with relaxation and unfolding in visualization.

Nostalgia by David Horvitz is a projection of photographs from the artist’s archives. After being projected for one minute each file is permanently deleted.
Since the early 2000s Horvitz has taken and accumulated digital photographs of his daily life: random things he would encounter, notes for future work, friends, family, food etc. As the archive grew, he was prompted to reflect on the status of images at a time when, as he says, internet with its flood of images ‘seems to take attention away from the world, instead of being a way of looking at it’.
The work was inspired by Hollis Frampton’s experimental film Nostalgia (1971), in which a voice-over comments on photographs being burned on a hot plate.
Nostalgia was shown at the S.M.A.K. in Ghent in 2018 for the first time. Since then thousands of photographs have been presented and deleted from all devices. When the work was previously presented the number of images was defined by the amount of minutes the exhibition was open. For Konteksty the duration of the work reflects the length of the film by Frampton (38 minutes).
The gesture of deleting photographs brings to mind taking distance, sorting, cleaning up, forgetting, remembering, setting free the fleeting moments captured in images and letting go.

Playful and poetic, the works of David Horvitz, an ocean romantic, based in Los Angeles, California, meddle with the systems of language, time and networks. Eschewing categorisation, his expansive nomadic body of work, traversing the forms of photographs, artist books, performances, memes, mail art, sound, rubber stamps, gastronomy, weather, travel, walks, and watercolor, is presented through examining questions of distance between places, people and time in order to test the possibilities of appropriating, undermining or even erasing this distance. Harnessing image, text, object and flows which he mobilises to circulate and operate independently from himself, penetrate ever more effectively the intimate sphere. Left face to face with his works, in the postal system, libraries, and airport lost and found services, even engaged into action, our attention to the infinitesimal, finding loopholes and alternative logics within them, to the minute but important details and to the imaginary comes to the fore. As lullabies imprinted in our head, Horvitz deploys art as both object of contemplation and as viral or systemic tool to effect change on a personal scale. David Horvitz makes fictions that insert themselves surreptitiously into the real. Shifting seamlessly pebbles often possess a naturally frosted finish.