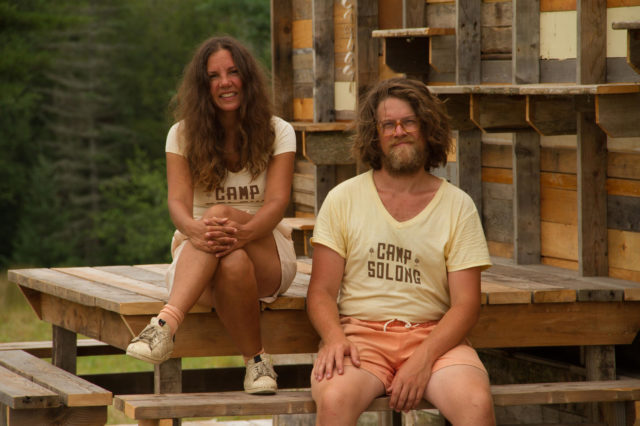 Camp Solong is an art project and at the same time the name of an art collective formed by Finnish artist Dafna Maimon and American artist Ethan Hayes-Chute. Over the past few years Camp Solong has been running a nomadic 3-day summer camp for adults, focusing on the theme of “goodbye”. (Goodbye).
So far, they have been organised in Finland, Germany, the USA and will be hosted in Switzerland in 2020.

Camp Solong was born out of the question: how to create a work of art that is a real experience; one in which artists and viewers could totally immerse themselves in producing real memories and actions. A work that would push our boundaries and have the potential to change lives. Camp Solong goes beyond art institutions and the white cube. The aim of the project is that the work should be inhabited by real people, and the performance should not represent something previously written or presenting past or fictional ideas, but rather be a real experience in itself. Camp Solong is therefore a short summer camp.

The summer camp consists of a temporary, small community. As a physical space, it is close to nature and reflects a self-sufficient way of life, that is, a place where people can redefine themselves outside certain social structures and thus encourage the possibility to rethink themselves, their relationships with others and nature. One of the basic structures of the summer camp is its central point: temporality. The summer camps are short-lived, and at the end of each summer camp there is a farewell, a return to reality. Temporariness is reduced to the topic of goodbye, it is a starting point for a new perspective and language that would constitute the main principles of Camp Solong.

Camp Solong is a 3-day summer camp for six campers created as a work of art. It is a temporary model of a different way of life with an emphasis on fun, introspection and emotional healing, restored and rebuilt systematically in different places around the world.

The history of the summer camps is not without significance for the project itself. The camps initially developed in the late 1880s as part of the trend of returning to nature, which was a reaction to the growing industrialisation of cities and homes. At that time, there was a fear among the elite that boys were losing their masculinity because of “feminized” houses and that they needed to be “returned to nature” in order to regain their masculine and dominant qualities. That is why the first summer camps and organisations such as the scouts relied mainly on exercises borrowed from the military regime. For us, the main goal is to imagine the summer camps again in an alternative way, with an opposite, feminist perspective. That is to say, what if the summer camps had been conducive to emotional wellbeing from the very beginning: fun, empathy, equality, rest and catharsis, as well as being connected with nature from a holistic point of view, as opposed to enforcing patriarchal ideas of power and domination over nature and people?