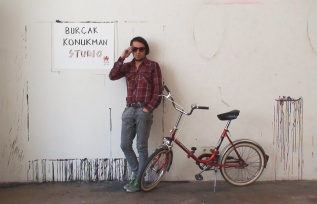 “P.I.G.S” is an acronym that refers to the economies of Portugal, Greece, Spain, and either or both Ireland and Italy. First coined in the mid-1990s, the term originally referred to the southern European economies of Portugal, Italy, Greece, and Spain. During the European sovereign-debt crisis in 2009, the term was popularised as a label for heavily-indebted economies, perceived as having been the impetus for the crisis. In this sense, the term sometimes included Ireland in place of Italy, or both in the acronym PIIGS. Some news and economic organisations have limited or banned use of the term because of criticism regarding perceived offensive connotations.

Burçak Konukman– (born 1984) contemporary Turkish artist, based in Istanbul and Berlin. Currently doing MA in Cultural Management at Bilgi University. He is known for his interdisciplinary video and photo installations with live performances and site specific interventions. His approach is self-reflective and performative, thinking globally and acting locally. Burçak Konukman is a co-founder and co-director of the Germany based IPA (International Performance Association) Istanbul and the Art Director of the “Platform for Young Performance Artists” – festival which took place in Istanbul in 2012, 2013 and 2014.