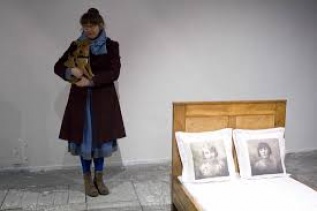 In 2006 I started to embroider sentences on napkins. Sentences that were on my mind, made me restless, needed some kind of outlet. By sewing them letter by letter I could cope with them. In early 2009 I created my first tapestry. The maxims that appeared were not always comfortable or proper, but compelling and true, my own truths, maybe witty and maybe not. Traditionally woman stitched tapestries with mottoes and accompanying depictions and hung them in kitchens for decoration or as a warning. Only were these their own maxims? I think not. They could have sewn whatever they wanted. What would have happened if they went all in?
In 2006 I was invited to take part in the exhibition “Krzątaczki”, as part of which I displayed my tapestries in shop windows on Krakowska street in Kazimierz. They fit in perfectly, haberdashery, fabric store, everything for the home, the reactions of the woman who saw them were spontaneous.
The summer of 2015 in Sokołowsko. Maybe a residents of the spa town and visiting artists, strolling slowly down the main street, will see a maxim that speaks to them in an apartment window, on the grocery shop, movie theater or the library. Maybe it won’t just be women, maybe a man will receive the message, and not just feel a jolt of fear that he is the tyrant from the tapestry “Ala leave the tyrant”.

Bettina Bereś– studied art history at the Jagiellonian University. She is a painter. In 2001 she received a scholarship from the Ministry of Culture and National Heritage.  Her one-man shows were presented at the Pryzmat Gallery, Otwarta Pracownia, the Koło Gallery and others, and group shows at the Contemporary Art Gallery “Bunkier Sztuki” in Krakow, Center for the Arts “Łaźnia” in Gdansk, the Szara Gallery in Cieszyn. Bettina  lives and works in Cracow. Her paintings are inspired by woman’s everyday chores. She places everyday objects (such as jugs, bowls, jars) against monochromatic and modest backgrounds, simplifying their form to signs, reducing them to icons, objects remembered from childhood. Thus she endows them with new meanings and emotions.  Everyday life becomes a work of art.