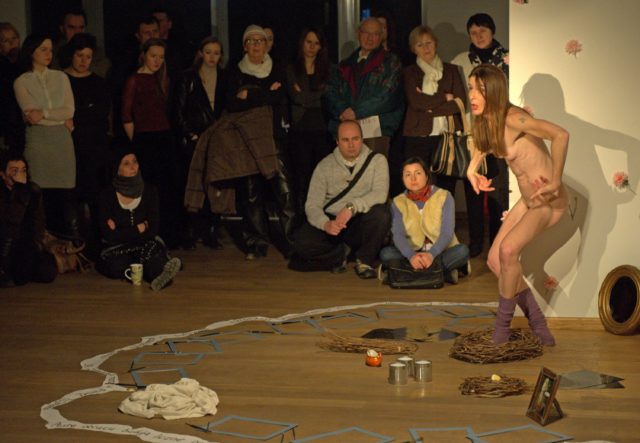 Anne Seagrave is a multi award winning Irish artist. She frequently presented her distinctive movement based live art performances internationally for 25 years (1983 – 2008) during which time she was based in the UK, Ireland and Spain. She performed at the Richard Demarco gallery in Edinburgh in 1985 and was subsequently invited by Richard Demarco to present performances in Poland in 1986. She was also invited several times by Władysław Kaźmierczak to present her performance work at the festivals: Irish Days and the Castle of Imagination in Poland 1996 – 2005. From 2004 – 2008 she was a research fellow at the University of Ulster in Belfast, focusing upon artist’s use of self image.
In 2008 she retired from performance, working instead for 2 years full time with horses in Spain. Since 2010 she has been based in Kraków where she continues to work with horses. She has also presented several exhibitions of self portraits in Poland and occasional performances in Europe between 2010 – 2014.

Anne Seagrave explained the concept and background to the PROJECTS, focusing on her connection to Richard Demarco and performances and exhibitions in Poland.

A silent video artwork that was devised during an artist in residency at the Irish Museum of Modern Art in 2006.