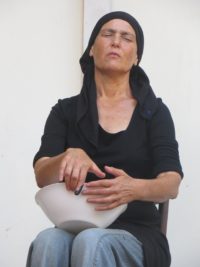 Adina Bar-On revisits her video performance of 1999 “Portrait” which she realized in the midst of the Judea Dessert. She says: In the video, Portrait, I also regard my audience with intimacy and speak to them directly as if they were in the same space as I am. My intention is to create a situation in which each person, in the audience, will feel that I am speaking to her or him and that that she or he are an extension of the situation and therefore may become more conscious of their own personal points of view; become aware of how they react and what interpretation their reaction enthralls.

Pertaining to her video-work Portrait, 1999

After a descent of 430 meters below sea level, one detects the glimmer of the turquoise Dead Sea, and we near the thicket of dried hedges and entangled plastic bags, torn stone walls and scanty tiles of far-gone buildings. An acute steer of the wheel to the left brings to sight rising mountainous rocky sands that roll smoothly, to the touch of one’s eyes, turning inexplicably from white shades to blue and grey.

It was spring and a late morning hour, in the midst of the Judean Desert, when the four of us made the grueling climb, with camera, sun reflector, sound equipment and small video monitor, to the peak of a hill.  As we began filming, I was sitting on a wooden stool, opposite me, standing behind his camera was Yoav, and by his side were Idit my devoted friend, and Yasmin my daughter. We were where prophets roamed in their search of god; the caressing effect of the dense air was a sure indication that god may still be by our side and in any case, the taste of salt on our skin and lips made us feel equal to these divine surroundings.

My image with the majestic historic landscape behind me was meant to suggest a Renaissance portrait. Because in Western culture woman and landscape have already been embodied in multiple forms and have gained historic seniority, I have challenged this image again. I re-created the indisputable in my own image and in my homestead as a situation for a camera and three beloved persons. Despite the years that have elapsed since I created Portrait, I choose to write here in the form of a confession leaving the analyses of my conduct, behavior and speech, which is always meddling with women’s role in culture, to you.

In each of Rembrandt’s self-portraits, the gaze sets out from the canvas to the viewer’s real space thus drawing out each one’s personal notions of what the Rembrandt in the painting may be saying. In the video, Portrait, I also regard my audience with intimacy and speak to them directly as if they were in the same space as I am. My intention is to create a situation in which each person, in the audience, will feel that I am speaking to her or him and that that she or he are an extension of the situation and therefore may become more conscious of their own personal points of view; become aware of how they react and what interpretation their reaction enthralls. As I have insinuated in the previous excerpt, I am concerned with human situations or, in other words, social compositions; the arrangement of the human component in my art-work is what I find fascinating and this, of course, as a reflection of the wider social reality. If my work is able to facilitate different responses from each of my viewers, together with an awareness of their own individuality and their conscious acceptance of the multiple approaches, then I have created a perfect social composition. I have the romantic pretext that the social formations, in their aesthetic disguise, that occur in my work, will trigger some impact.

In preparing for the production of Portrait, I drafted the sequence of images and scenes on paper, in drawings and words, so that Yoav will understand how I would like him to work, and I put special emphasis in drawing the lines of the movements of the camera. In this video-work I granted the camera a greater visibility; its presence is noticed in the discussion I have with Yoav, the cameraman in the video-work itself, and in movements of the picture that may fluctuate, be abrupt or be so close as to be blurred. The camera movements are as an extension of human states of mind, or a painter’s stroke, which would be mine if I could hold the camera and perform at the same time. Following each take, we viewed the sequence together on the small monitor so that, if necessary, we immediately repeated the scene to suit my intentions. It was crucial that the work will not be affected by the afterthoughts of editing; that following the actual filming, the work will be finalized in the simple process of “cut and paste” of its excerpts.

In my aspiration to have the video frame resemble a Renaissance portrait, it was necessary to elongate the picture into a rectangular format as a canvas would be; the landscape was treated with an overall delicate texture and its natural color was converted to black and white in order to divert from the naturalistic impression. In addition, I generally suggest that, if possible, the work should be projected on a wall so that my image is nearly life-size so as to suggest a portrait of the 17th century.

At the end of Portrait I exclaim, from my biased conscience, that the rolls that I have taken upon myself in life should earn me the right to redemption: “I truly believed that the investment, the dedication to my work / as an artist, a teacher, a mother and sister / will further my redemption – our redemption.” In other words, I address a society whose values are being altered: Does dedication to art and to family not earn an entitlement to redemption?

Adina has been an active performer since 1973, when she was a 3rd year student at the Bezalel Academy of Fine Arts and Design in Jerusalem. Over the years, she has presented her work in Art Museums, culture events, and galleries, in Israel, Europe, across Asia, Canada and the USA. Making it her business to emphasize her political and social stand, she has insistently performed in social and political events.

Since the mid 1970’s she has taught painting, visual communication, and performance art, in the various institutions of higher learning in Israel and abroad. Her methodology of teaching visual communication has evolved in her workshops at Bezalel Academy of Fine Arts and Design in Jerusalem. In 2001 Bar-On was awarded a major prize for her contribution to Israeli art by the American Israel Cultural Foundation, and Idit Porat`s book, Adina Bar-On, Performance Artist, was published in the same year.

In recent years, she feels the growing urgency to channel her educational initiatives to promote other ways of discussion about Differences; The project “Aesthetics and Bias – Polish Israeli Art Student Meeting” (2008-18) has been an educational initiative between Bezalel Academy and four prominent Polish Institutions of higher art education, as well as careful initiatives between Bezalel Academy and Dar al Kalima in Palestine.