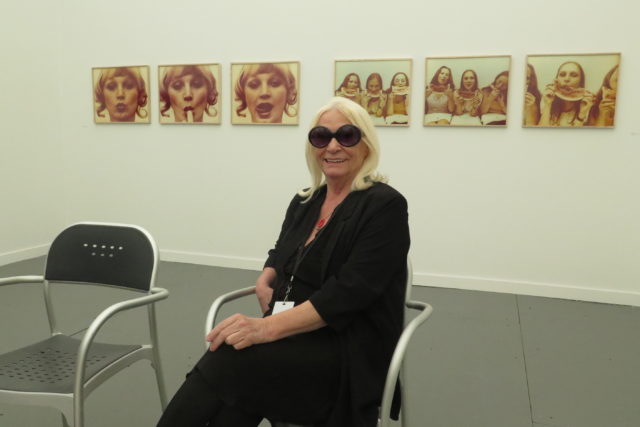 In 1972, in a manifesto Postawa transformująca (Transformative Attitude) Natalia LL wrote: “Art is in the process of becoming in every instant of reality: to the individual every fact, every second is fleeting and unique. That is why l record common and trivial events like eating, sleeping, copulation, resting, speaking etc”. These are the words of a young artist fascinated with new art – conceptualism, which not only rejected object as a fetish but, most importantly, it entered non-artistic areas at the same time giving up on gesture, afflatus, and artistry. For Natalia LL and artists, who co-created PERMAFO group with her (Andrzej Lachowicz, Zbigniew Dłubak and Antoni Dzieduszycki) the best means of realization of these postulates were photography and later also film.

One of the first works that constituted the attempt to objectively record reality was the cycle Topologia ciała (Topology of the Body) dated 1967. Two naked people (Natalia LL and her husband Andrzej Lachowicz) photographed themselves in a stiff pose in the middle of a field. This assumedly cold record – a record of a body with a photo camera carries a vast emotional charge. The bodies congealed in a stiff pose beam with amazing energy and reveal the relationship between those two people. The situation is similar in case of the cycle Fotografia intymna (Intimate Photography) dated 1968-69, which is one of the boldest works of the epoch. These photographs are a record of an ordinary activity – love between two people and, at the same time, a manifesto of new sexuality, which is uninhibited, non-hierarchical; within which a woman finally becomes an equal partner, an active side. In turn, Sztuka konsumpcyjna (Consumer Art) that was created in 1972 was firstly a photo and then film record of a trivial activity such as eating bananas, pudding or sausages. This work and the many meanings it conveys, until this day, after almost 50 years, stirs up huge emotions and generates amazing energy, after almost 50 years – its removal from the exhibition in the National Museum in Warsaw in 2019 and the society’s reaction this act triggered only prove the fact that Consumer Art, in some way despite the artist’s will, has become a political work of art.

In 1969, Carol Hanisch, an American feminist activist, wrote an essay entitled The Personal Is Political. She claimed that the most personal situations, given that they are understood deeply, reveal the ways women are incapacitated in the society. Although this text was not known in Poland in the ‘70s, it is connected in an interesting way not only to Natalia LL’s work but also Anna Kutera, Jolanta Marcolla, Teresa Murak, Ewa Partum, Maria Pinińska-Bereś. By using the elements of their closest surroundings, their body and image, these artists voiced their opinions on a topic important to them as it referred to themselves and other women. They intuitively sensed that a moment of change had come and the submission of women and their absence in public space was a relic of the past. It was difficult to express their opinion on this topic in a country, where besides a narrow group of people, no one considered this matter important. That is why due to lack of understanding and developed language, the artists often used subversion and humor when they were referring to themselves, ordinary activities and trivial everyday life. We can see that not only in Natalia LL’s Consumer Art but also in a photo installation Słowo (Word) dated 1971 and many later works dated from 1985-2010, in which with a peculiar distance the artist relates to passing time and changes that occur in her body.

Next to Natalia LL’s better known works, the exhibition I Record Common Events will also present photographs never displayed in Poland that the artist sent to Paramedia gallery in Berlin in 1974 for an exhibition. The exhibition will also show photographs and films that present the artist’s everyday life and work in her apartment in Wrocław that also served as her studio.