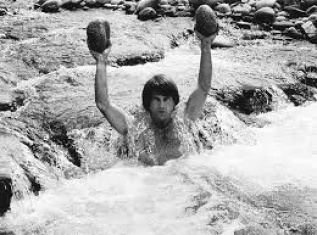 (born in 1947 in Warsaw) – a self-taught photographer, video and installation artist, co-founder of the In Situ Foundation. From 70′ he has been associated with neo-avant-garde as an artist, also documenting artistic events. In 1974 he had his first show at the Remont Gallery, in 1975-1977 he was associated with the Wspolczesna Gallery. In 1974-2000 Rytka realized his Private Collection, documenting the life and work of his artist friends. For many years he realized his works “in cooperation with the Bialka river”. Asserting that the stones last forever and symbolise the eternity of nature, he set them in motion – questioning their static character. He has suffered from a serious illness for a number of years, which has limited his artistic activity.

Some Meetings is a series of photographs realized in the 1980s. They are analogue photographs traditionally printed and then glued onto metal sheets. Each photographs is a montage. It features people representing Polish art world photographed separately on some other occasions and put together. These are imaginary meetings, although they could have happened.

Private Collection is a big cycle of photographs taken over many years, first shown in 1987. These are analogue photographs that were subjected to graphic intervention of the artist. It is a unique documentation of the private life of Polish artists conveying the atmosphere of those days. Its historical significance has been increasing as its protagonists have been passing away taking that world with them.