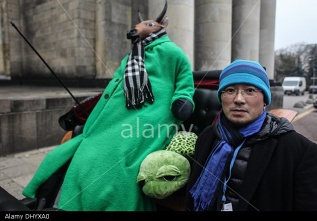 Crossing the Tide, the Tuvalu
Pavilion for the 56th Venice Biennale reflects on the plea of small island nations facing the effects of global climate change. This is manifested by rising sea levels and increasing severe storms causing floods, and ultimately threatens the future of these small island nations such as Tuvalu, located in the Pacific Ocean.
The Tuvalu Pavilion features a flooded pavilion. It connects the flooding of the Tuvalu to the flooding of Venice. Crossing the tide in the Tuvalu Pavilion over slightly submerged footbridges, visitors find themselves in an imaginary space – a dreamscape, consisting only of sky and water.
The Tuvalu Pavilion represents a natural environment, but one that is essentially manmade and is the work of the Taiwanese artist Vincent J.F. Huang. Huang has been working on issues related to climate change since 2005 and created his first art project on Tuvalu in 2010. In 2012 he joined the Prime Minister and Foreign Minister of Tuvalu on an official delegation to the United Nations Framework Convention on
Climate Change Conference of Parties 18 (UNFCCC COP 18) meeting in Doha, Qatar. From 2010 Vincent J.F. Huang has been closely connected to Tuvalu, visiting the Polynesian island nation on several occasions and keeping close contact with the Tuvalu government and community organizations on issues of climate change.
The Tuvalu Pavilion for the 56th Venice Biennale reveals a world consisting only of sky and water. The first chapter of the ancient Chinese book of Zhuangzi, “Free and Easy Wandering,” describes such a world in the story of a giant fish named Kun who changes into a massive bird named Peng. When Peng beats his wings, the sea roils. Peng rises to enormous height. The sky is blue, and when the bird looks down,
all is blue too.
The book of Zhuangzi is one of the foundation texts of Daoist philosophy. It considers ways for mankind to achieve happiness and freedom by living in harmony with the natural world, and to become “free and easy wandering.” But the truth is that we are no longer living in accordance with nature, and instead we are facing many environmental disasters.
The Tuvalu Pavilion considers how artists like Vincent J.F. Huang have taken on climate change as the subject matter of their work, andconnects to the overall theme of the 56th Venice Biennale, All the World’s Futures in approaching the “fresh appraisal of the relationship of art and artists to the current state of things.”

Vincent J. F. Huang- received his MFA at the Gray’s School of Art at Robert Gordon University in Aberdeen, Scotland in 2000. Huang worked in the Department of Visual Communications at Shu-Te University in Kaohsiung, Taiwan (2001-2006). In 2007, he was a visiting scholar in Zhu Qizhan Art Museum in Shanghai. Huang has been an artist-in-residence in Kaohsiung, Shanghai, Sydney and New York. Starting in 2010, he has been working with Tuvalu, a small island nation in South Pacific that is facing the risk of becoming uninhabitable due to sea level rise. Huang represented Tuvalu as an official delegate at the United Nations Framework Convention on Climate Change, 18th Conference of the Parties in Doha, Qatar, in 2012, and the UNFCCC, COP 19 in Warsaw, Poland, in 2013. He represented the Tuvalu Pavilion at the 55th Biennale di Venezia. Also in 2013, Huang was awarded the 7th Presidential Cultural Award in Taiwan. He has exhibited his works and site-specific art projects in many countries around the world. 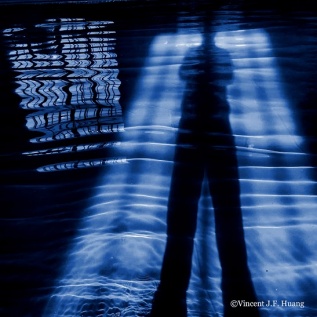