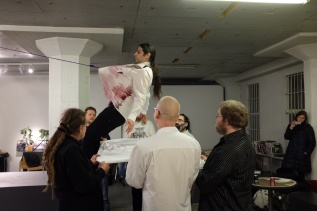 I was born in Poland, the epicenter of communist paradise, in 1970. I have lived through the Martial Law of 1981-1983, the disintegration of the totalitarian system in 1989, and the Millennium Flood in 1997, which robbed me of all my possessions. That same year, I decided to stay on the edge of the world in the land of the thousand lakes.

After almost twenty years I returned to my hometown. I noticed cracks in the recently renovated facades as well as in interpersonal relationships.

Isn’t this sufficient evidence that the universe is expanding?

Tomasz Szrama (born in 1970 in Poland) graduated in 1998 from the Fine Arts Academy in Wroclaw, Poland. He currently lives in Helsinki, Finland. Szrama shifts between a multiple of disciplines, including photography, video and performance based work. All his work was always based heavily in performance art, regardless of the form used, and eventually began to dominate his artistic practice. Since 2008 Szrama has been performing internationally at various events and festivals, including the United States, Canada, China and Mexico. Szrama has been an active performance art event organiser since 2005. Together with Linna Kuitten he started in 2014 a series of events called TONIGHT. Tomasz Szrama is currently working as a producer, designer, and technical manager, he is responsible for organising live art events at HIAP – Helsinki International Artist Programme.