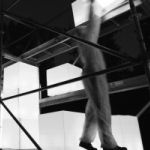 The action on the idea, proposed by K. Żwirblis and referring to the earlier Burning Pole of Holm, of multiplying the motif of the burning masts. In it’s fully developed version, the action was performed in public sqares in a rectangular 10 x 12 m field.

The Akademia Ruchu Theatre was founded in Warsaw in 1973, with Wojciech Krukowski as founder and art director.
Since the very beginning, it has been known as ‘theatre of behaviour’ and visual narration. The group’s practice combines the disciplines of theatre, visual arts, performance and film, focusing on the shared qualities of movement, space and social message. This is connected with a sense that artistic radicalism and social meaning do not have to be mutually exclusive. Akademia Ruchu’s public-space work, pursued continuously since 1974 (about six hundred performances, events and street actions), is the first example in Poland of such a systematic creative practice –outside the official institutional framework– in ‘non-artistic’ space: on the streets, at private homes, in industrial spaces. On the other hand, transferring elements of the everyday reality in unchanged form into the ‘holy’ space of art (onto the stage, into the gallery) has served to enrich its anthropological vision without in any way impoverishing the aesthetic one. Akademia Ruchu has presented its work in almost all countries of Europe as well as in both Americas and Japan as part of tours and major theatre festivals, e.g. at the Institute of Contemporary Art (ICA) in London, documenta 8 in Kassel, NRL Live Art in Glasgow, Museum PS1/Cloctower Gallery in New York, Ludwig Forum in Aachen, Los Angeles Contemporary Art Exhibition (LACE), Museum of Modern Art in Yokohama or the Walker Art Center in Minneapolis.