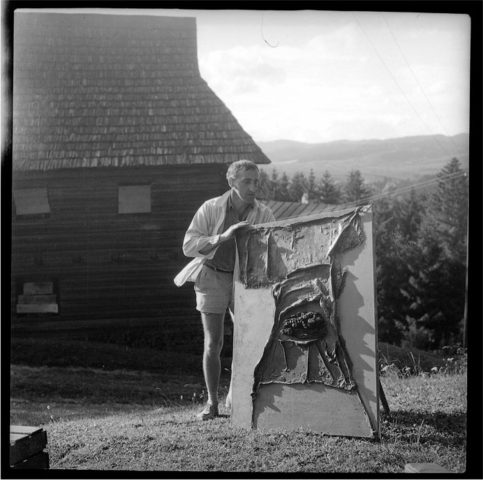 Stage director, creator of happenings, painter, set designer, writer, art theoretician, actor in his own productions and lecturer at the Academy of Fine Arts in Kraków. Born in 1915 in Wielopole Skrzyńskie, in the province of Tarnów; died in 1990 in Kraków.

Kantor was inspired by Constructivism, Dada, Informel art and Surrealism. He was attended the Academy of Fine Arts in Kraków and studied under Karol Frycz, an outstanding set designer of the inter-war period. Kantor staged his first productions – Jean Cocteau’s Orpheus, Juliusz Słowacki’s Balladyna and Stanisław Wyspiański’s Powrót Odysa / The Return of Odysseus with an underground theatre company that gave performances in private homes.

Immediately after the war he worked as a set designer, mostly for the Helena Modrzejewska Old Theatre in Kraków. Kantor continued to design for the stage on a regular basis throughout the 1960s, primarily working on abstract sets. A trip to Paris in 1947 inspired him to better define his own individual approach to painting, and a year later he founded the Grupa Krakowska / Cracow Group and participated in the Great Exhibition of Modern Art / Wielka Wystawa Sztuki Nowoczesnej in Kraków. But when Polish government authorities began to promote Socialist Realism as “official” art, Kantor disappeared from the art scene altogether. It wasn’t until 1955 that he finally exhibited the paintings he had been creating since 1949.

1955 was an crucial year for Kantor for several reasons. It was the year that he inspired a group of visual artists, art critics and art theoreticians to help him create the Cricot 2 Theatre, which would become an incubator for his creativity. Cricot 2’s first premiere was Mątwa / The Cuttlefish by Stanisław Ignacy Witkiewicz (1956), a production in which Kantor cleverly juxtaposed the work’s sublime rhetoric against a host of found objects and the banal environment of a café. The production included many elements that were to become characteristic of Kantor’s theatrical style, such as sets that suggest silent films and actors who move and act like mannequins.

Cricot 2’s second production was Cyrk / Circus, based on a play written by the company’s own Kazimierz Mikulski, also a painter. It utilised a technique known as “emballage”, which was also typical of Kantor’s theatrical work at the time. In Circus, emballage took the form of black bags wrapped tightly around the actors. Such packaging was designed to strip actors and objects of any recognisable form, turning them into indistinguishable substance. Kantor’s emballage period was followed by “Informel Theatre” (1960-62), a sort of automated spectacle that relied entirely on coincidence and the movement of matter. The actors in Kantor’s Informel Theatre production of Witkiewicz’s W małym dworku / Country House (1961) were treated like objects, entirely stripped of their individuality.

However, Informel Theatre failed to fully satisfy Kantor. The form was insufficiently integrated in an internal sense and too many of its parts were open to reduction. Kantor therefore replaced the concept of Informel Theatre with that of “Zero Theatre” (1962-1964), which was completely devoid of any action or events. This idea was most fully embodied in Cricot 2’s production of Wariat i zakonnica / The Madman and the Nun, also by Witkiewicz, which Kantor staged in 1963.