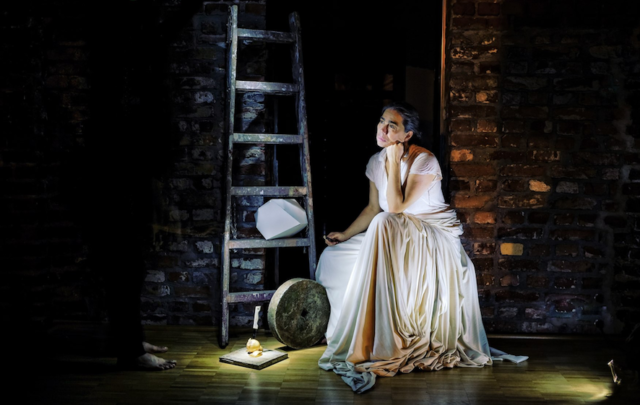 bio: Susanne Weins is a German vocal artist, voice trainer and certified Roy Hart voice teacher. With a background in classical and Extended Voice, her work encompasses approaches to a variety of vocal techniques, experimental voice work and knowledge about linguistic teaching and research. She is the founder and director of the Atelier Performative Künste, a voice formation and performance production space in Düsseldorf, Germany.

Through a targeted use of body and movement, she seeks the greatest possible flexibility in the voice. Her performances revolve around the notion of ‘how to do things with words’.

We were those who knew but did not understand, who grasped but could not imagine, filled with information but devoid of insight, crammed with knowledge but scant of experience. So we went, no longer detained by ourselves.

Seemingly, melancholy is a state of stagnation, a feeling of pensive sadness with no apparent obvious cause. Inasmuch as the postmodern promise, the freedom from fear, now lies in ruins, post-truth politics have largely framed cultural debates by appeals to baseness emotions, which are causing greater division among people. The repeated assertion of talking points to which factual rebuttals are ignored, runs parallel to the compulsive hustle to consumption, caused by a capitalistically motivated addiction and mediatic manipulation. Within this scenario, where what seems to count is just the ability to prevaricate the other with any means for the sake of personal survival and affirmation, there is also a need for holding-up the Self, for a melancholic résumé, for a pupation of mankind in the melancholic space, to contrast the nowadays craving selfishness and spurious logic which are detrimental to our existence.