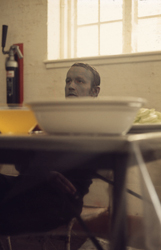 Stuart Brisley (born 1933) is regarded as the godfather of British performance art.
He has been singularly consistent throughout a career spanning 60 years in his involvement with political and social issues (he was a founding member of the Artists Union) and a desire to challenge the established cultural expectations has been embedded in his subject matter. He is a republican and throughout his career has made works which question the British class system. Brisley’s work is represented in numerous public and private collections worldwide. In Britain his work is represented in the Tate, Arts Council England, Henry Moore Institute, Leeds Museums; Galleries, and British Museum. He lives and works in Shoreditch in the East End of London, Dungeness, and in Istanbul.