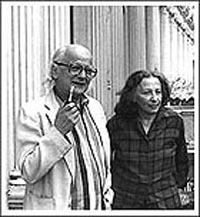 Avant-garde filmmaker, experimenter in the field of photography and photogram, writer, author of books for children, poet, philosopher, graphic designer and drawer, composer, playwright and publisher. Stefan Themerson transcended each of these categories in their conventional manifestations. He did not identify himself with any of them completely, and when asked about his “profession”, he replied that he did not consider himself to be a noun, but rather a verb, who had not happened for billions of years, who then started happening, is now happening and will soon stop happening. The instruments, available to the fields Themerson was a practitioner in, and which he used interchangeably, allowed him to look at and analyse the world from many possible points of view. He always did it with a distance and a sense of humour which he called a sense of reality.

In his oeuvre Themerson aimed consistently to neutralise the divisions between traditional disciplines of art. His photograms originated as a result of his unconventional approach to the medium of photography. He defined his films as ‘photograms in motion’. At the same time his films reflect the structures of musical pieces . He designed Avaton – a synthesizer (never realized) – which was to translate images into sounds and vice versa – whereas his semantic poetry was translation which restored meaning to words.

Themerson kept returning to the same ideas but in different forms. He juxtaposed apparently incompatible worlds to question the customary modes of thought. It wrecks havoc with the classification systems on which order is based. Themerson was against putting labels and classifications because the world is more complicated than the truths about it. The essence of things is not in them, it is in your eye – he wrote.

Throughout his whole life, together with his wife Franciszka – an outstanding painter, graphic artist, stage designer, co-author of all the films, illustrator of Stefan’s books, a partner in his life and work (when reminiscing their work they could not really remember which ideas were whose) – he tried to walk backwards, but advance forward, preferring to go full steam ahead, but backwards.