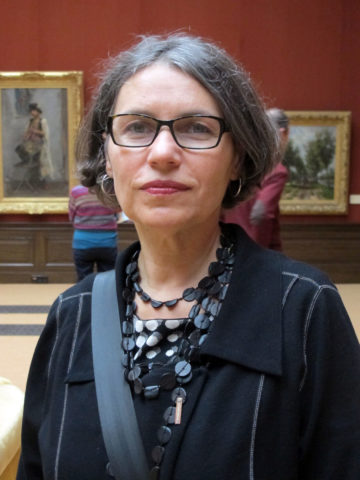 bio: Sofi Żezmer  was born in Łódź, Poland, and studied at New York University prior to receiving her BFA in 1986 at the Cooper Union College for the Advancement of Science and Art in New York. In 1993 she received her MA in Art History (Constructivism) at the Hunter College in New York. She lives and works in Wiesbaden, Germany and occasionally in New York.

Sofi Żezmer has exhibited internationally in galleries, exhibition spaces and museums. Her two most recent solo shows in 2017 were at the Marta Shefter Gallery in Krakow and at The Polish Sculpture Center in Oronsko, Poland. Her forthcoming solo exhibition ‘Structural Changes’ will take place at the Kunsthalle Wiesbaden in Germany, in 2019.

Sofi Żezmer had a solo show at the Ron Lang Gallery in Amsterdam in 2016 and presented her work in an individual exhibition ‘Cloud Backup’ at DWD in Offenbach near Frankfurt on the Main in 2015. She also took part in the group show ‘New Frankfurt Internationals: Solid Signs’ at the Frankfurter Kunstverein and at the Nassauischer Kunstverein in Wiesbaden, Germany in 2015. In 2014 her work was exhibited in a solo show at the Richard J. Massey Foundation in New York.

Images and articles about her work have appeared among others in Flash Art Magazine, Arts Magazine, Art in America Magazine, Sculpture Magazine, Art & Antiques Magazine, FaustKultur Online Magazine, Zeit Wissen Magazynie and in the following newspapers: Frankfurter Allgemeine Zeitung, Wiesbadener Tagblatt and Frankfurter Rundschau. In 2012 her monograph ‘Sofi Żezmer SIGHT SEEING’ was published in Salon Verlag, Cologne. In June of this year an interview with Michael Amy will be published in Sculpture Magazine and an article about her work by Dorota Monkiewicz will appear this year, in the forthcoming issue of the quarterly magazine of the Polish Sculpture Center, Oronsko, Poland.

“This project consists of several parts.