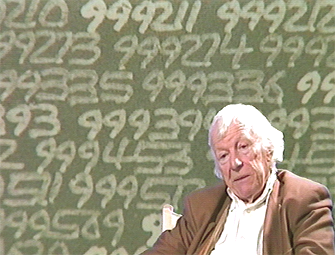 Roman Opałka (August 27, 1931 – August 6, 2011) was a French-born Polish painter.
Opałka was born on August 27, 1931, in Abbeville-Saint-Lucien, France, to Polish parents. The family returned to Poland in 1946 and Opałka studied lithography at a graphics school before enrolling in the School of Art and Design in Lodz. He later earned a degree from the Academy of Fine Arts in Warsaw. He moved back to France in 1977. Opałka lived in Teille, near Le Mans, and Venice. He died at age 79 after falling ill while on holiday in Italy. He was admitted to a hospital near Rome and died there a few days later, on August 6, 2011, three weeks before his 80th birthday.
In 1965, in his studio in Warsaw, Opałka began painting numbers from one to infinity. Starting in the top left-hand corner of the canvas and finishing in the bottom right-hand corner, the tiny numbers were painted in horizontal rows. Each new canvas, which the artist called a ‘detail’, took up counting where the last left off. Each ‘detail’ is the same size (196 x 135 cm), the dimension of his studio door in Warsaw. All details have the same title, “1965 / 1 – ∞”; the project had no definable end, and the artist pledged his life to its ongoing execution: ‘All my work is a single thing, the description from number one to infinity. A single thing, a single life’, ‘the problem is that we are, and are about not to be’. He had contemplated and tried many different ways to visualize time before settling on this life’s work.
Over the years there were changes to the process. In Opałka’s first details he painted white numbers onto a black background. In 1968 he changed to a grey background ‘because it’s not a symbolic colour, nor an emotional one’, and in 1972 he decided he would gradually lighten this grey background by adding 1 per cent more white to the ground with each passing detail. He expected to be painting virtually in white on white by the time he reached 7,777,777 (He did not use commas or number breaks in the works): ‘My objective is to get up to the white on white and still be alive.’ As of July 2004, he had reached 5.5 million. Adopting this rigorously serialized approach, Opałka aligned himself with other artists of the time who explored making art through systems and mathematics, like Daniel Buren, On Kawara, and Hanne Darboven.[4] He was represented in Paris and New York by Yvon Lambert and in Venice by Galleria Michela Rizzo.

Roman Opałka by Lothar Wolleh
In 1968 Opałka introduced to the process a tape recorder, speaking each number into the microphone as he painted it, and also began taking passport-style photographs of himself standing before the canvas after each day’s work.
In 2007 Opałka participated at the symposium “Personal Structures Time-Space-Existence” a project initiated by the artist Rene Rietmeyer.
The final number he painted was 5,607,249.