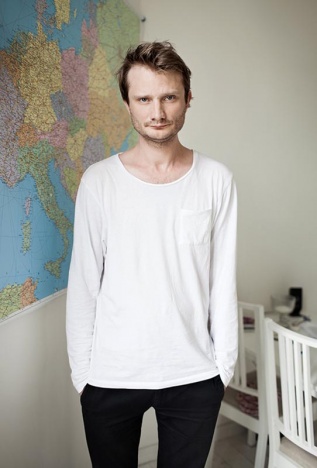 A series of three videos „Ducks and Trees” from 2014 takes a discrete dialogue with Mondrian, who made in his paintings a famous transaction from an organic tree to a geometric and abstract one.
My film triptych is also about generally understood game between what’s geometric and defined in it’s shape and what’s organic, liquid and unpredictable.

Here the trees have geometric and rigid shape. And from the liquid and chaotic things the ‘ducks’ are emerging in an unpredictable way.
One could say, by the way, that title “trees and ducks” are a to some extent a counterpart of “clocks and clouds” from the seminal Karl Poppers’ text on relations between determinism and freedom.

Piotr Bosacki – (b. 1977) in 2007, he co-founded the informal artistic group Penerstwo as well as the musical group Kot. he is an artist with versatile interests, as he creates animated films, installations, objects, drawings, literary and musical compositions. he compares his artistic practice to the philosophy of nature. Bosacki’s works can be interpreted as unique experimental models of reality, based on the example of the artist’s studies on the nature of things – its structure, mechanics, and poetic potential. the matter, images and language used to build and describe these models, originate from everyday experiences. his favorite materials are items of everyday use, simple art materials such as paper or cardboard, taken from life anecdotes, dreams, or colloquial speech. these modest and ordinary things are the starting point for Bosacki, leading to his philosophical speculations and, at the same time, to seek the poetic aspect of human survival in the world, where philosophy and poetry merge into one in the artist’s works.