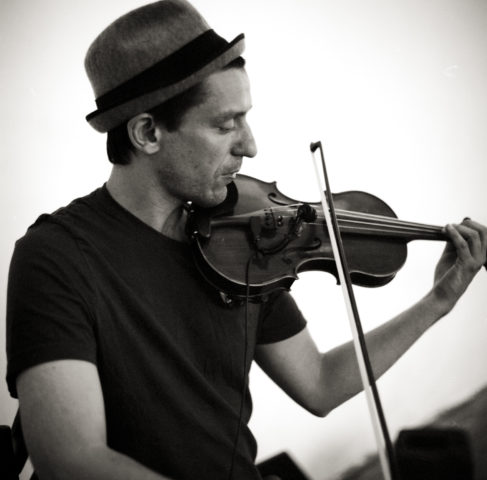 Patryk Zakrocki (b. in 1974 in Warsaw) improviser, composer, and sound artist, a member of the LADO ABC association.

He currently participates in a duo SzaZa playing violin, modular synthesizers and electric mbirze. He also takes part in audiovisual Normal Bias group where he deals with archaic electronics, changing the old melodies and old music boxes. Most recent of his activities is “Gabinet Masażu Ucha Wewnętrznego” (Inner ear massage center). During hi artistic career he performed with artists such as : Fred Frith, Noel Akchote, Kazuhisa Uchihashi, Mitch and Mitch, Franz Hauzinger, Koichi Makigami and many more. He published 11 cd albums. Is the author music for theater, movies, documentaries, shorts and silent cinema? Among the silent cinema movies were Roman Polanski’s student films and animation puppet Wladyslaw Starewicz. Soundtrack by Zakrocki was written to the images presented so far in the United States, France, Norway, Switzerland, Iceland and Uruguay as well as in China and Japan. He conducted “Galimadjaz” concert series, co-created ” Inwazja Dzięku” in the Zachęta gallery and was the founder and curator of the Sound Cinema at the European Congress of Culture in 2011. Music by Patrick Zakrocki was repeatedly rewarded and singled out what made him always-shameless pleasure.