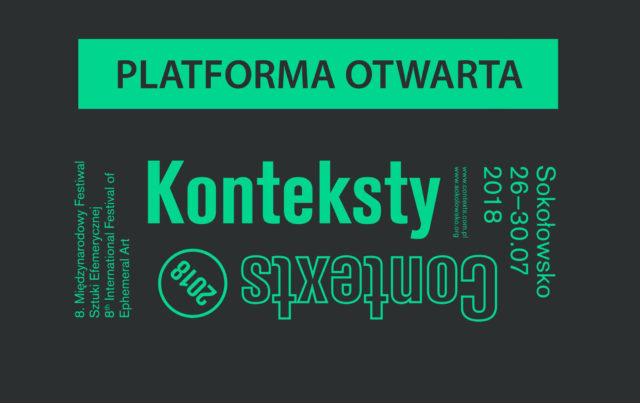 An exploration of the topic of identity in cultural and social context based on personal experience. Perception of the body in movement as a living sculpture. Aesthetic inspirations drawn from science-fiction films.

A half-open sonic and light space, an audio-visual and sensual experience whose tissue will be weaved thanks to the interference of people – each time someone unveils the curtain it will trigger a series of sounds. A movement sensor will be coupled with synthesizers thanks to which the artists will be able to interpret, transform and layer in real time the intrusion of foreign objects. The space’s working name is fulgent circle and it will also take care of other senses:  through visuals, lights, stroboscopes, prisms, crystals and mirrors as well as smells / smoke – everything will be a live element of a performative installation. The artists invite the festival guests to participate. They will also create an open stand with a theremin playing with light and waiting for the people’s spontaneous reactions. They will be not only witnesses but also creators in dialogue with musicians.

Natalia Kopytko comes from Łysa Góra, where the life of the entire village was focused around “Kamionka” – a factory where ceramic decorative and functional objects were made. The factory is connected to a story of a certain family. The artist’s grandfather, Antoni Kopytko, was one of the creators of the ceramic industry and completely devoted to social work. The life of Łysa Góra for years has been built around ceramics. Currently, only a memory of the former uniqueness of this place remained. The fall of “Kamionka” left an open wound in the society of Łysa Góra. “Kamionka” cooperative was closed when People’s Republic of Poland fell. Until this day, the inhabitants of Łysa Góra are trying to determine the reasons and they are blaming each other. The factory produced plates, vases and other decorative objects made from red clay. Objects that were not suitable for export would end up in a shop by the factory and later in the homes of citizens of Łysa Góra. The objects that were not successful were thrown away to the dump and recycled. The citizens used them to harden the roads and decorate the walls of houses. Nothing went to waste. Ubiquity of these products affected each aspect of the lives on the inhabitants of Łysa Góra, who created ceramics, used it to decorate their houses and processed it. I became something completely natural and common to them.

In reference to the main theme of the festival Foreign body, the artists are moving fragments of Łysa Góra history and Kamionka cooperative to Sokołowsko, which for many years has been famous for medicinal traditions, hoping to heal them. The idea is based on creating a fragment of a path from fragments of ceramic goods, the so called shells brought from Łysa Góra. Some of the broken fragments the artists will obtain from the fallen factory, some of it will be dug out from the ground, roads etc. Fragments of this type are unnoticeable in Łysa Góra however in this new context they will gain the attention and become a part of the healing process.

A cart with a fridge for selling meat ie cream, ice cream in various shapes from classic to strange ones. Meat ice cream is by definition something not tasty and inedible but create from food that if prepared otherwise could be delicious. Meat ice cream are another good produced industrially from industrially farmed chickens, cows, pigs and other animals. It is perfect in times when food only needs to look good on Instagram, it doesn’t have to be tasty because there is no need to eat it! Show your friends that you ate meat ice cream made from a majestic bison or a wild lynx etc. The cart with the seller will be moving around the neighbourhood and spilling slogans. 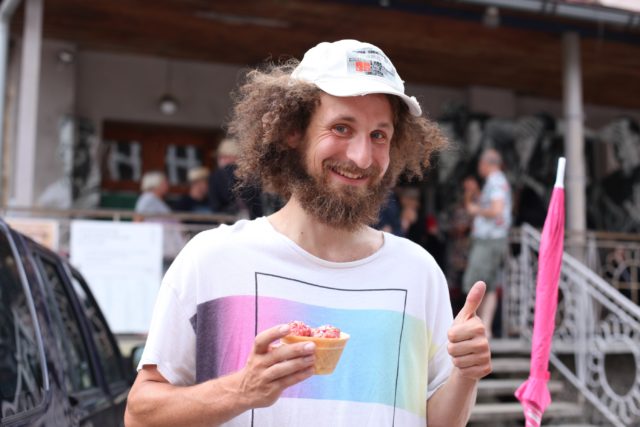