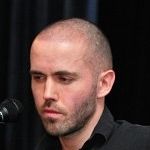 Lives and works in Warsaw (Poland). His works are part of the collections of the Centre for Contemporary Centre for Contemporary Art in Ujazdowski Castle in Warsaw, Film collection Filmoteka of Museum of Modern Art in Warsaw. Other collections include National Museum in Krakow, ING Polish Art Foundation and the Museum of Contemporary Art in Krakow (MOCAK). Norman Leto’s debut solo exhibition took place in the Centre for Contemporary Art in Warsaw in 2007. At the same time he was invited to collaborate with the director Krystian Lupa on the play Factory 2, where Norman Leto’s job was to prepare video sequences shown during the performance. During 2009 – 2010, Norman Leto devoted himself to residency in New York in order to complete his autobiographical novel Sailor. Simultaneously, he completed a full-length film of the same title. The film was well received at the 10th Era Nowe Horyzonty International Festival, and featured in numerous individual and group exhibitions. The British Tribune described it as “the best and most surprising independent debut of the festival.