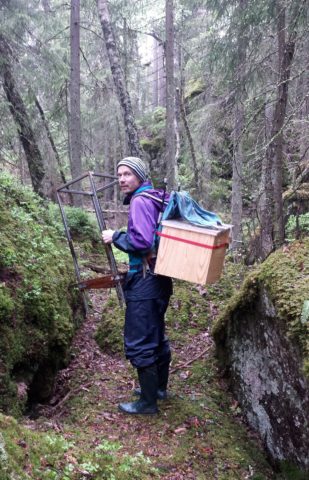 “Baggefälla is a sculpture or interactive installation. It functions as a human scale trap. The trap has attributes that is meant to appeal especially to Norwegians. The project is playing with the relationship between Norwegians and Swedes and is inspired by the long tradition of telling jokes about each other. It reflects a certain degree of jealousy and bitterness among Swedes of Norway finding oil in the North Sea: the little brother becoming taller and having a bit more of attention.

At the same time the installation is also a reminder of the side effects of sudden wealthiness and the mechanisms of capitalistic society. Furthermore, Baggefälla is a homage to the brown cheese that seems to have magical powers. It can be used for almost everything. It´s like emergency survival food and would probably be the perfect tool for MacGyver.” – Mattias Cantzler

Mattias Cantzler (b. 1976, Sweden) studied at the Art Academy of Oslo and has been based in Norway for 13 years. He is mainly working with installation, sculpture, analogue 16mm film, video, animation, photography, performance and land art. His work is often focusing on space and related to the site. A source of inspiration for him is the american/italian architect Paolo Soleri and his definition of space as reality, as well as the thoughts about the concepts archeology, ecology and architecture, or how the problems of the urban civilization possibly can be solved. Cantzler’s artistry is characterized by experimentation and an uncompromising attitude. He has recently exhibited at Gallery Konstepidemin (Gothenburg), Gallery 54 (Gothenburg), Ibsenhuset (Skien), Prosjektrom Carl Berner (Oslo) and at Oslo Utmark.

In cooperation with OCA