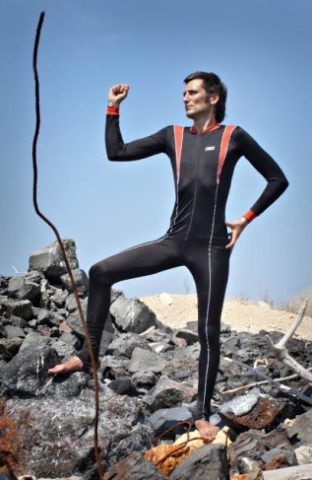 The performance focuses on decursing the Sokołowsko area from all kinds of charms and spells cast in ill will. This applies in particular to the now infamous arson attacks on the dr. Brehmer Sanatorium, where the performance will take place.

The author, dressed as a magician will cast spells countering the bad charms and hexes, and afterwards burn the ritual incense. He will follow this up by climbing up the newly renovated Sanatorium tower, and dropping incense attached to a parachute, that will drop dramatically in the lights of lasers and smoke.

The ritual is something that the author views as his responsibility to Sokołowsko, that “charmed him” the previous year. This will probably be the first performance event on the Sokołowsko tower.

The performance is inspired by a similar action from 1992, titled “Nazism will no longer flood our souls”, held in the city center of Lodz and detrimental to the rapidly growing (after 1989) movement of consumerism glorification. The author, wearing a magicians robe, after declaring his manifesto, in a spectacular fashion smashed recently purchased bottles of coca-cola on the street pavement. He then swept the broken glass with a brush and dustpan and threw it in the trash.

Marcelo Zammenhoff– (Piotr Wygachiewicz), born in 1970 in Łodź. Filmmaker, photographer, performer, designer, composer, experimenter. A representative of both Polish experimental cinema and independent music scene (electro / synth / noise). He lives and works in Lódź. He is a constructor of the first cassette samplers and author of pioneer programs in the TVP2 called “Television Atlantis” (1993-1994), the organizer of the Festival Digital Thought CYFROTEKA, the founder of the Electric Theatre, the film group Plazma TV and the Xylolit Gallery in Lódź (1995-96). Precursor of new musical genres (psycho-trance). He has founded groups: F.P.Z, Morris Generativ, Protoplazma, E-1500, E-1, Górecki-500, Mikrowafle and his last project Throbbing Wafle prepared to be published in 2015. Marcelo creates electro-installations using fluorescent lights, LEDs and lasers and art video. He is the author printed in sections, unfinished futuristic novel “Earth – Moscow”.