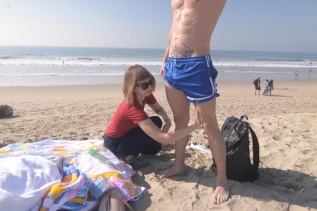 During this year’s residence in Los Angeles I created a series of screen printings on beach towels. The printed motifs may seem like pages from my diary. Their form is reminiscent of Matisse and Art Brut, they depict erotic scenes, as well as situations related to daily hygiene. As part of the Contexts festival of ephemeral art I plan to present short (5 to 10 minute) intermissions in between artistic performances. These will be presentations of beach towels using various choreographies and scenarios. I plan to engage festival attendees or the local population in these actions, depending on the scenario. Performance participants will be wearing beach clothing, acompanied by music, performing tasks commonly associated with wellness and leisure, while at the same time delivering short quotations refering to the history of Sokolowsko, the surrounding area as well as to the theory of art. These subversive actions will be interludes resembling advertising adds. My intention is to manipulate the idea if identity, autobiography and historical facts, using strategies similar to those of a virus.

Magdalena Kita– born 1983 in Dębica (Poland). Polish artist based and working in Cologne (Germany). In the years 2003-2005 she studied painting at Academy of Fine Arts in Cracow (Poland), and then at Kunstakademie in Dusseldorf (Germany), where she had her diploma being Meisterschülerin of Prof. Rita McBride. In 2014 she got grant of the Ministry for Family, Youth, Culture and Sports of the State North Rhine-Westphalia and traveled to Los Angeles (USA). Author of many performances and exhibitions mostly in Germany, but also in Poland and USA e.g.: Californication in Museum of Contemporary Art San Diego (San Diego, USA, 2015), Offspacenight in Osthaus Museum, (Hagen, Germany, 2014), SMOG Performance Festival in Katowice Cultural Centre (Katowice, Poland, 2010).