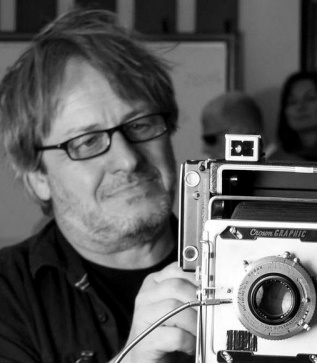 I Mark the Frames of Time

I’ll start the description of this project with a quotation from the leaflet which I hand to people in places where I take photographs.

• I take a photograph of one half of somebody’s face using untypical lighting. The other half of the face will be photographed in ten years.

• Each photographed person agrees for her/his image to be used in my exhibitions and publications, and after a few years I send a scanned negative to her/his email address

• I take half-portraits of people regardless of age, sex or profession

• Because I want to register a 10-year passage of time

• It is not only about passing time, but also about people participating in this ritual, being creators of this project along with myself. To join this project is to meditate on passing time.

• I use an analogue technique because it allows to share experience of a moment – the photographed person and photograher, evidenced by a single negative which I develop and print myself.

An image, especially a photographic image registers a moment. It takes a moment of releasing the shutter outside the frames of time of the photographed object and photographer. The photograph itself may become a point of reference now. When we compare the photographed object, person with a photographed person or object we can observe changes that take place as time passes. The artistic dimension of this narrative is not what we see, but the thought we can embrace, sometimes just for a moment, and touch in the realm of our imagination. It is where the word „time”acquires another reality, not the one of our everyday hustle. Time experienced in this way becomes „an object” to which this project is subordinated. It is my way of closing this passing time.

I have realized this project since 2011 and plan to continue it for 20 years. It means that I photograph the left side of a face for 10 years and right side for another 10 years. So far ( it will be presented in detail in the attachment) I visited over a dozen places in Poland. I also took the project to Denmark, Germany and Czech Republic. I have taken ca.2000 half-portraits. I photograph with 4×5 in. Graflex, an old American camera. Each photograph is registered separately by a physical and chemical process on a black and white negative. I realize that I am an anachronistic photographer, but in this project I consciously chose the figure of such a photographer. An old camera, a piece of fabric used to frame and focus the image, time to set the parametres of light, put in the cassette, take a photograph and write down an email for sending the scanned photograph. This way of taking photographs allows a very intimate contact which the photographed person. People come to such a photographer, like in the old days, sit down comfortably, often start talking. Conversations are mostly about time and passing which fills me with joy. In 2013 I took a photo of Marcin Bortkiewicz. Our conversation about my project led to his documentary A Left Side of a Face of which my work was a starting point.

Leszek Krutulski– photographer, lecturer, co-founder of the „po” Gallery, founder of archives. Graduated from the Academy of Fine Arts in his home town Wroclaw. He has been engaged in photographing for three decades. He works as a lecturer for the Institute of Visual Arts at the University of Zielona Gora. His artistic work consists of documenting time, history and maintaining the memory of people and places. For several years he has been archiving and digitizing collections of glass negatives from the years 1911 to 1933 by the Silesian photographer Otto Eichler. Thus he has been restoring abandoned images of history, modernity. His project “Half portrait” is a reference to the idea of collecting and creating the set: collection of portraits that evolve in time from a document to a symbolic record of passing.