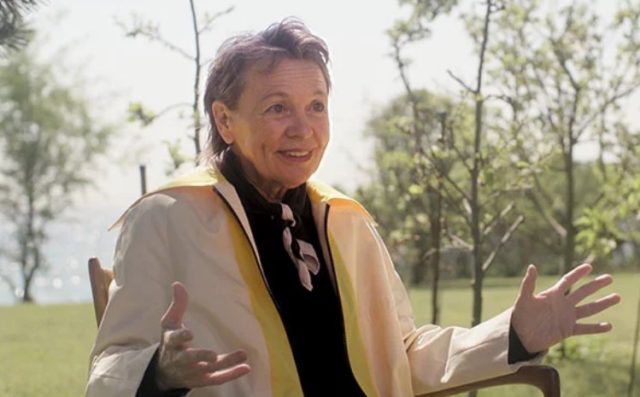 “Be loose!” The legendary multimedia artist, musician and film director Laurie Anderson puts it as simply and clearly as that when she here advises artists to avoid being pressured into limiting themselves artistically.

Calling yourself something as “vague” as a multimedia artist – as Anderson does – gives you the freedom to do whatever you want, without having to worry about whether it fits a certain definition: “It’s so easy to get pigeonholed in the art world.” Anderson is aware that sales are a strong underlying factor – “I am a 21st century citizen in a highly corporate world” – but she nonetheless maintains that you should always follow your own interest and obsession: “Whatever makes you feel free and really good – that’s what to do. It’s really simple.”

Laurie Anderson (b. 1947) is an internationally renowned experimental performance artist, composer, musician and film director, based in New York. Initially trained as a sculptor, Anderson became widely known outside the art world with her single ‘O Superman’, which reached number two in the UK pop charts in 1981. She is considered a pioneer of electronic music and is praised for her unique spoken word albums and multimedia art pieces. Among her most recent work is the film ‘Heart of a Dog’ (2015). For more about Anderson see: www.laurieanderson.com/

Laurie Anderson was interviewed by Christian Lund at the Louisiana Museum of Modern Art, Denmark in May 2016.