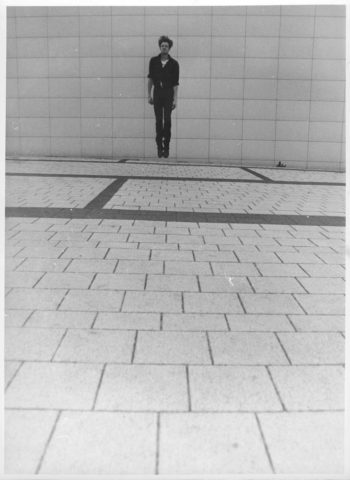 Krzysztof Kaczmar is a multumedia artist born in 1989 in Bielsko-Biała, Poland. He’s currently in his final year at the Faculty of Intermedia at the Kraków Academy of Fine Arts. Krzysztof Kaczmar is a Bielsko-Biała culture and art programme scholarship holder and a beneficiary of Nowy Kraków – a promotional programme for young theatre and performance artists granted by Teatr Nowy Assocation. He has presented his works at the festivals, galleries and public spaces in Germany, England, Poland and Portugal – in Fábrica Braço de Prata in Lisbon, Grimmuseum in Berlin, Cervantes Institute in Warsaw and Bunkier Sztki in Kraków. Krzysztof Kaczmar focuses mainly on discovering material and metaphysical possibilities of using space while building a relationship with the audience. He is involved in the Performative Circle project, – creating a space that encourages the audience to actively interact with it.

“My performance deals with questions of a migrant identity that adapts to the conditions of the new environment. The personality of a migrant person is being lured out and combated, when he/she is forced to leave the nest of culture and community that has shaped him/her. This person is then exposed to unfamiliar norms just like oil that leaks into an autonomic water tank. It’s pushed out to the peripheries, repressed for its colour, origin and qualities. My performance will create a space – a type of a container whose aim will be to question common moral values and antagonisms of different outlooks on life that members of the audience might have. I aim to trigger universal values present in every person, which will allow the audience to come together as a unified and joint mixture.” – Krzysztof Kaczmar