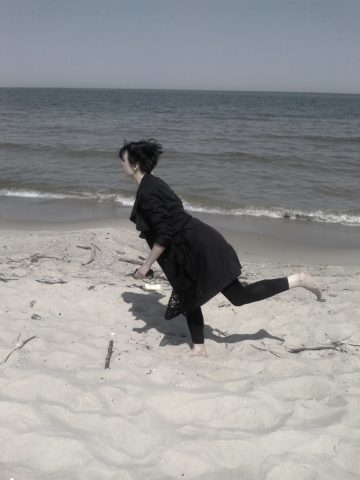 Katarzyna Podpora – born in Kołobrzeg, lives and works in Gdańsk; stays strongly attached to the sea – its soundscape, its movement, how it affects solid matter; graduated from the Academy of Fine Arts in Gdańsk [Faculty of Sculpture and Intermedia Art, obtained a PhD degree in 2014 – in Prof. Katarzyna Józefowicz’s studio]; she is not employed at the academy, but works as a translator and a teacher; she is fascinated with the interreflection: words/meanings/reality which forms her creative thought and practice; her artistic interests focus on space reflected in record [objects, installation, sound, video] – she works on such issues as materiality of written word, the process of recording/reading, substances that convey meaning; she co-organizes workshop projects at the Borderland Centre in Krasnogruda.

instead of rush [double transposition]

The piece stems from the artist’s long-lasting work with a particular material [soft rush] which now marks her own space [it was a series of activities where rush underwent several transformations which were to somehow bring weeds closer to script]; as well as from reflecting what emigration actually means to an artist who carries his own space around [with every step] and expresses it ‘taming strange territories’.

The double transposition means conveying a recorded sound of the artist’s work with rush in her ‘familiar space’, as well as the person [herself] doing the actual work – attempting to find her matter [rush] in the mountains and to cover the new space with its meaning.

The piece’s timing is not fixed – it is ‘lasting’ and open for those who would like to listen to the space brought from the seaside [filled with rush] or enter the process of the artist writing – taming the unknown space [making it her own].