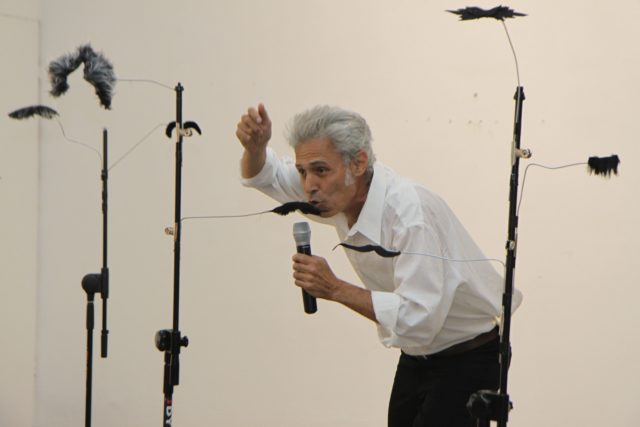 bio: “My work is a dialogue between my artistic work and my academic research in the field of voice, sound and performance art. I studied computer science and completed my B.Sc. and M.Sc. degrees at the Hebrew University in Jerusalem (1987, 1990). I then decided to turn to art and studied theater and performance art in the School of Visual Theater in Jerusalem (1993). After completing my theater studies I pursued a career as a vocal performance artist. I create works of Sound Poetry, a medium situated between poetry, music and performance art that investigate the borderline between sound and the spoken word. I perform in various contexts of music, visual art and theater in Israel and abroad, and some of my work has been published on audio CD. Parallel to my artistic work I also started to conduct academic research about the voice as an interdisciplinary medium. At Ben-Gurion University in the Negev, I wrote my PhD thesis entitled “Text-Sound Art: Speech with Source and Temporality Disturbances in Avant-Garde and Intermedial Vocal Art”. It was conducted under the supervision of Prof. Haviva Pedaya (Ben-Gurion University) and Prof. Eitan Steinberg (Haifa University). In my thesis I proposed a model that characterizes the unique poetics of vocal performance art. This type of poetics is based on disruptions of language, the source of the voice and its temporality, and represents an attitude that distinguishes vocal performance art from other mediums that use voice such as music or theater”.

sound performance: What my grandmother said to Franz Josef

The work is a poetic exploration of the relationship between voice and memory. The vocal work breaks up language to sounds, creates multiple vocal personas and detaches between the body and the voice. The voice in the performance is always in search of a body that is non-present, while the body that is present is a foreign one. The games of covering and dis-covering the voice and the body attached to it attempt to conjure forgotten memories and missing histories. The starting point is an attempt to vocally animate a lacuna in my family’s history: the childhood of my mother’s parents in a small town in South Poland (former Galicia) before WW1. My grandparents left Poland during their youth, lived in Germany, moved to Israel, always talked German between themselves, and never told us any stories about their birthplace and childhood. Any imagery or experiences related to this chapter of family history could only be fantasized.

The performance consists of 3 text compositions: