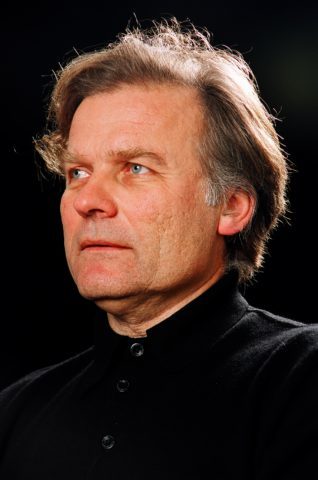 (b. 1954 in Lublin) performance, installation. Creates performances and drawings, author of numerous installations and spatial realisations. In 1975-79 studied at the Warsaw Academy of Fine Arts, obtained his degree in painting under professor Stefan Gierowski in 1979. In 1976 he co-founded  the artistic group Pracownia (Studio) , then ran “Pracownia Dziekanka” 1977-1979. Since 1979 he has been a member of Akademia Ruchu group. Since 1982 he has conducted his original didactic courses in the form of workshops, realized in artistic and educational centres at home and internationally. From 2009 he has run his performance art studio at Univeristy of Art in Poznań.

Performance: A View into the Window 2017

A View into the Window 2017 is a performance that refers to the performance of 1997 A View into the Window realized in at Andrzej Mroczek’s Gallery in Lublin. It is a kind of vehicle that moves along the street, up and down. A man is enclosed in a frame, almost biologically connected with his body and taking over the characteristics of human existence – tensions, resistance and aspirations.