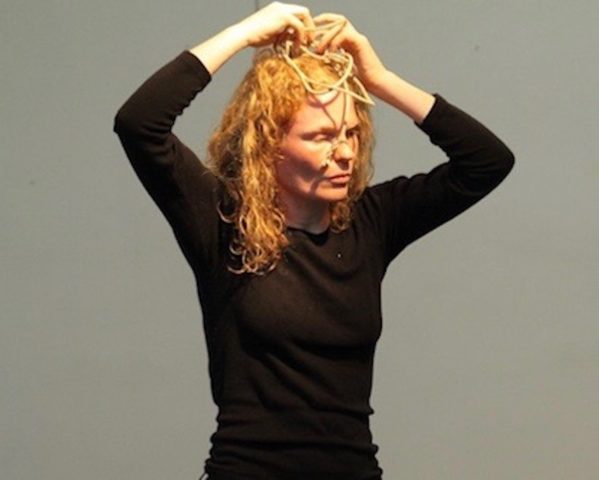 bio: Gisela Hochuli has been performing internationally for two decades. She was awarded the Swiss Performance Award in 2104.

Her performances are usually structured around what is to hand, apparent, whether it’s her own body, the context of the space, the audience or site-specific materials and everyday objects, which act as her partners in the dynamic of the performance.

Although she may determine the framework in advance, Gisela Hochuli always performs with great spontaneity, developing actions unpredictably, in a similar way to a musician improvising with an instrument. Elements which appear during the performance become multi-faceted.  Objects are freed from their surface qualities; their potential is confused and the unknown is made visible.

There is an unquestionably subversive approach to all this, balanced by the calm minimalist elegance which distinguishes Hochuli’s performance works, as well as qualities which make demands on both the senses and the intellect of her audience.

All is symbols and analogies. The wind on the move, the night that will freeze are something other than night and a wind. Everything we see is something besides. (Fernando Pessoa)

The performer interacts with a red flag creating a composition of live images she creates a transformative flowing dialogue based on an equal relationship— the performer doesn’t impose her intention, her will onto the object, but finds ways to float together with it. The Red Flag is the oldest symbol of socialism (and by extension communism), thus Red is also the colour that in its universal acceptation symbolises the extremes— passionate love and violence, seduction and danger. Our prehistoric ancestors saw red as the colour of fire and blood – energy and primal life forces – and most of red’s symbolism today arises from its powerful associations in the past.