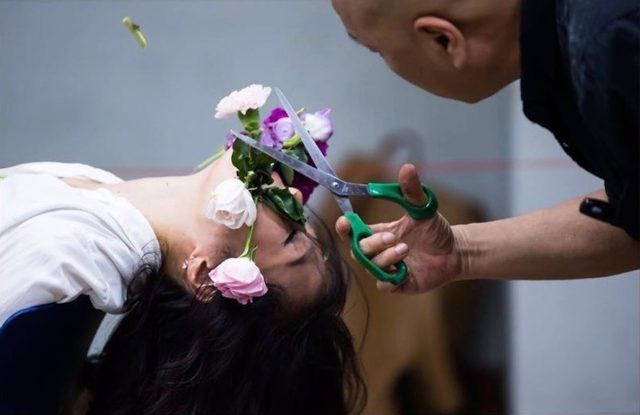 Gim Gwang Cheol – artistic director, visual artist and founder in 2012 of a performance art academy programme in Gwangju, Seoul and Wanju as well as in Bangladesh – is among the most prolific Asian performance artists today.  As a young man, he lived under military dictatorship, so  it followed that he would bring questions about personal freedom and democracy into his art practice. His philosophical background allowed him to develop an approach to performance art that focusses on humanist discourses that relate power to language, while examining the impulses and types of communication that form a civilization. Because of his freethinking lucid irony, his live works are often permeated with a cynical, nihilistic yet heart-breaking romanticism: an evolutionary personal dialectic is applied to reality as he sees it. Gim Gwang Cheol’s is neither a world of logic, nor a world of illogic— it can be everything or nothing.

Gim Gwang Cheol approaches performance as a form of ‘dynamic meditation’, using his own body to undergo different phases of ‘morphological’ transformation. From 1993-1999 his work revolved around the question of how to resist the fundamental discipline imposed by institutionalized societies and the search for one’s own identity. He spent the first five years of the new millenium focussing mainly on the processes of change that in the body. Since then, he has been working on the ‘Multilayered,’ forging the above-mentioned concepts into forms of performative expression, which demonstrate his individual stance as an artist and as a human being.

Gim Gwang Cheol is project director of the non-profit arts organization Global Art Making Network. Founded in 2012 and dedicated to performance art, Global Art Making Networkseeks to reflect on the fundamental role of art, its values and existence. Based on the idea that art is the seed which creates the space for thought, it has expanded its network internationally, organizing international art festivals, performance art academy programs, independent exhibitions, hybrid art projects, workshops, street guerrilla performance art as a form of free artistic expression, and ongoing world art tours to create collaborations between Korean artists and artists from other countries. Since 2014, there have been six world tours in Europe, Asia and North America. ‘Reflection of Body Art’ is the title of this year’s European tour, taking in eight countries and focusing on the body as the most intimate physical form of mental intimacy.

Park Kyeong Hwa|bio: Park Kyeong Hwa trained as a writer. After graduating from the Gim Gwang Cheol Performance Art Academy in 2012, she published her first major work ‘My Barefoot’, followed by ‘Fishbowl’ and ‘Snail’.

Thanks to her unique performative style, Park Kyeong Hwa’s work is firmly rooted in the idea of language and writing that has a sense of romance. At times she questions whether emotions can be translated into digital and virtual realities; at other times, she uses the letters from texts as objects for the expression of personal conflicts and inner tensions, linking themwith global conflicts.

Her art is concerned with discovering ways of connecting the personal with the universal, as well as an awareness of every being’s struggle for survival. So that when poetry reveals the beauty of things to us, words such as ‘peace’ and ‘freedom’ perceived not merely as concepts, but experienced as real emotions.

The theme of the performance focuses around the ideologies of the 20th century. Socialism, nationalism and capitalism have been often the causes of brutal violence, so then from which perspective we should face the violence of today. Is violence just what it is? There is a kind of cynicism that permeates our civilization, because of the selfishness of knowledge.

Small fishes, fragile creatures— their life and existence placed in a tense situation. We realize that we love to live while inhaling and exhaling anger, sympathy, and sadness at the edge in between life and death. All the beings are as precious as it is the beauty of our values.

For the alchemist the one primarily in need of redemption is not man, But the deity who is lost and sleeping in matter. (Carl Gustav Jung)

The subject matter of ‘Logic Alchemy’ is about the relationship of coexistence between heterogeneous beings. The performance is conceived to portray the sometimes harmonious and other times hateful conditions that exist within a constructed society of people, which inevitably diverge in ideas and opinions of all kinds. It provides an extreme metaphor of the individual differences between ‘Male and Female.’ It’s a call for relationships to coexist, healing and understanding what follows from such co-existence. Logical Alchemy is a series planned up to #9. The first three chapters have been created in preparation the artist duo’s 2017 European tour. On May 26, Logic Alchemy # 4, # 5, # 6 premiered in Gwangju (SK) and will have its European debut at Konteksty 2018.