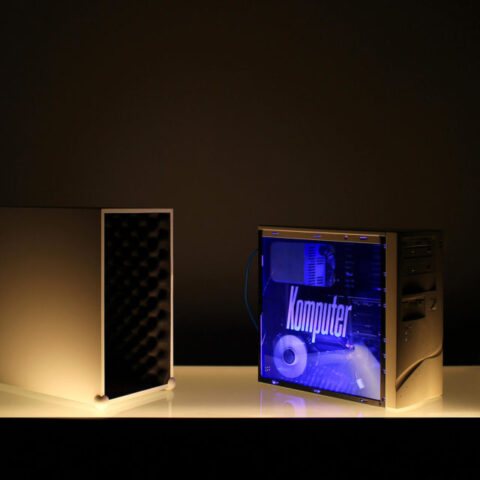 The toast at the Georgian feast, Supra, is in fact an oratorio show – an oratorio show that is effusive, affirmative, and insightful about the reality. It is brought by the host of the feast, and sometimes, with his permission, by the indicated guests. It is an anti-spectacular theatre, in which every feasting person has a role to play. Therefore, the host must demonstrate the ability to entertain the guests and maintain the proper rhythm of the feast. The table must not get bored with a toast in any way.
Although there is plenty of food here, Supra has nothing to do with the libation, drinking for a quantity, eating, partying. Recalling the entry from Kapuscinski’s diary, the Georgian feast is only a pretext – tasty and spicy, but a pretext.
As an art gallery, we would like to invite you to a joint feast. A July evening in Sokolowsko is a moment to drink to the gathered guests, friends, wonderful organizers, to love, art and the future.

PS. I doubt that only one Georgian ancestor – an outlaw who a hundred years ago loved my great-grandmother – could sufficiently authenticate my pedigree and the right to recreate in Sokolowsk a ritual drawn directly from another, indigenous ethnic culture. My personal travels to the Caucasus, during which I managed to get used to the social spectacle called Supra, and especially in the long toasts mentioned above, I noticed an interesting format of oratorio performances.

Galeria Komputer is an independent curatorial project by the artists Łukasz Radziszewski and Szymon Kaniewski.

The concept was based on elements of the narration of video games – particularly G.E.C.K. (from the Polish for Marvellous Land Ecosystem Generator), a fictitious miracle of technology, an artefact from the legendary game Fallout 2. G.E.C.K. was a mobile tool recreating ecosystems in a post-apocalyptic wasteland. Alongside G.E.C.K., another inspiration was the 1957 Stanisław Lem story “Przyjaciel” (The Friend). The narration presents the legend of a supercomputer, hidden in a cellar on plac Wilsona in Warsaw, which is attempting to take over the universe.
Main field of our interests are the concepts of social utopias and cosmism.