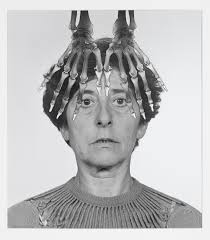 In 1966 she joined Walter Marchetti and Juan Hidalgo Codorniu in the Spanish performance art group Zaj, famous for its radical and conceptual performances, whose controversial “concerts” were presented in Spanish concert halls despite the censorship of Franco’s regime. Zaj also performed in many other countries for 30 years, until 1996, when the group broke up after a retrospective in the Reina Sofia Museum in Madrid.

As a performer she has participated in festivals in Canada, Korea, the United States and Japan, and throughout Europe (France, Italy, Holland Belgium, Bulgaria, Switzerland, England, the Czech Republic, Poland, Denmark, Norway, Slovakia, Germany and Hungary).Her production also includes objects, photos, video pieces, visual systems based on prime numbers, and a large collection of self-portraits in many media.

Ferrer is the author of two radio productions made for Radio Nacional de España (Au rhythm du temps and Ta, te, ti, to, tu ou l’agriculture dans le Moyen Age) and has given seminars on the performance arts in Universities and in Schools of Fine Arts in Spain, France, Italy, Canada, Switzerland and Mexico.

Ferrer represented Spain in the Venice Bienal in 1999, and did large individual shows in subsequent years in the FRAC Bretagne (Rennes, France), MACVAL (Val de Marne, France), and with the Instituto Cervantes in several South American cities.