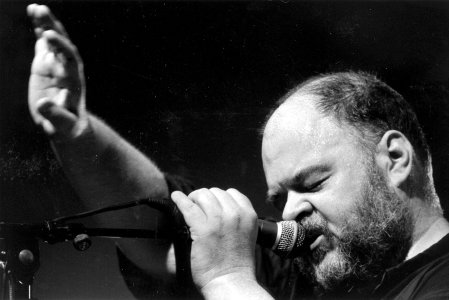 David Lynn Thomas (b. in 1953 in Miami, Florida) singer, songwriter, and musician.
He was one of the founding members of the short-lived protopunkers Rocket From The Tombs (1974–1975), where he went by the name of Crocus Behemoth, and of punk group Pere Ubu (1975–present, intermittently). He has also released several solo albums. Though primarily a singer, he sometimes plays melodeon, trombone, guitar or other instruments.
Thomas has described his artistic focus as being the “gestalt of culture, geography and sound”. Common themes crop up throughout much of his work, such as the US Interstate Highway system, images of roadside or “junk” tourist culture, Brian Wilson, AM Radio, and many others.
Something of a cult figure, Thomas’s high pitched voice is one of the most distinctive in rock music; Emerson Dameron memorably described Thomas’s singing as “James Stewart trapped in an oboe”, while Greil Marcus writes that “Mr Thomas’s voice is that of a man muttering in a crowd. You think he’s talking to himself until you realize he’s talking to you.”