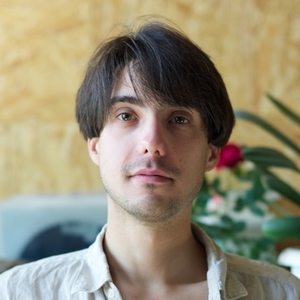 Christoph Both-Asmus (b. 1984, Germany) is the artist and director of THE TREE WALKER film. He is currently living and working in Berlin (Germany) and Shiuzoka (Japan). He has wanted to be a director of nature films and an environmental advocate, then during his studies he focused on Fine Arts. In 2010 he completed his Master of Fine Arts at the Sandberg Institute for Fine Arts in Amsterdam (Netherlands).
The multimedia work of Christoph Both-Asmus is mainly performance, film and video, sculptures as well as site-specific sculpture, installations and drawings.
The core of his works is the life on planet earth. Authenticity of his materials plays an important role. His works are created with natural materials such as paper, plaster and mouth-blown glass. We can also encounter animals, plants, ice, fire and soil.

Lots of different food, that we are eating contains staple foods like rice, corn, potatoes and wheat. In particular, wheat is milled and becomes white powder, which is further processed to become other foodstuffs. Wheat powder, named flour attracts us very much as a material. White powder can turn into many different forms such as bread. It is a natural bacteria called yeast, that determines how much the dough is changing. We feel something miraculous about the presence of yeast and the change that occurs due to the combination with water and flour. With this installation, we are presenting the presence and activity of yeast as something holy.

The installation will show the fermentation process of bread dough itself. Additional cheer and blessing humming that we recorded from different people and edited plays in a loop. The humming is based on a short part of Symphony No. 6 by Beethoven. There is scientific evidence that protein reacts to sound and some people believe that this specific part is stimulating yeast to grow.