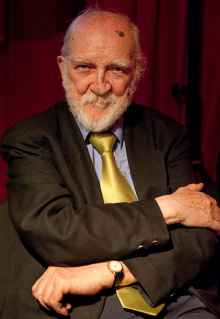 Composer, playwright, graphic designer, theorist, music critic and lecturer. Born in Lviv, 6 June 1929. He began learning music in Opole (violin), then studied composition at the PWSM in Kraków. In 1953 he graduated in musicology from the Jagiellonian University.

Among the contemporary Polish avante-garde composers, Schaeffer is the only one whose rich creativity cannot be expressed in terms of a specifically defined style. Schaeffer’s work is unique through the composer’s absolutely uncompromising inquisitive, researching nature; each work is a separate “treaty” on the subject of composition – whether in the field of structural issues, colouristic-timbral, a new type of expression, emotional expression or instrumental technique. Schaeffer is also one of the representatives of the few so-called “third stream”, i.e. operating with elements of both classical music and jazz. He also cultivates types of art such as visual music, graphic, instrumental theatre, happenings, action music, and music for actors. Of Schaeffer’s major compositions it is worth mentioning: Music for Strings – Nocturne (1953), Topofonica for 40 instruments (1960), Jazz Concerto (1969), Harmony and Counterpoint (1976), Missa Eletronica for boys’ choir and tape (1975), TIS MW2 (1963), Quartet for 4 actors (1966), Symphony in 9 movements (1973).