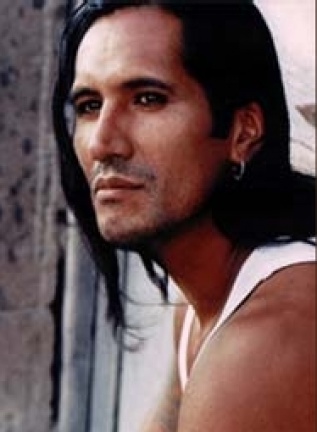 Consciousness is the source of compassion and appreciation for all living things. Consciousness is an organic intelligence that every human being is capable of having when the soul is awakened. Water is one of the elements that carries the consciousness of the Earth (Pachamama). The Earth is a living creature that reflects who we are. Every act of destruction done to her is one step forward to our own decay. In this installation I use three of the main elements of creation which is water, sound and light.

Anaxazi Aquila – born in 1965 in the city of Guadalajara in Mexico under the name of Francisco Javier Garcia. He spent his childhood in U.S. At the age of 17 he was awakened to his indigenous heritage and found his identity. He took the name of his ancestors Anaxazi, which means the first or the old ones. From this moment on his search as an artist begins. He spent majority of his life living between two worlds, Mexico and USA. For 10 years he had a studio gallery Mind and Sol in Chicago. At present, he lives and works in Mexico and Poland. His new project in Mexico “La Semilla de los Injenios” consists in creating an alternative cultural center. His work is a manifestation of his radical life path, indigenous roots and mystical approach. His intention is to create a surreal metaphor to awaken human consciousness as a reminder of how near humanity is to self-destruction. His paintings are full of expressionistic, abstract and surreal forms rich in harmonious colors, texture and sensitivity.