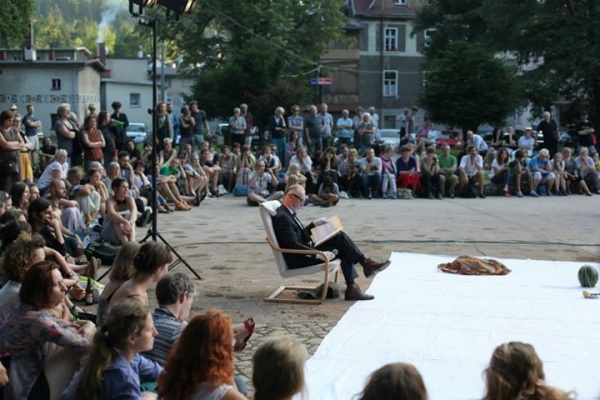 The less then half an hour spectacle is a form of philosophical picnic.
During the performance actors use string to move fruits and meats placed on cloth, pour wine, all whilst reading fragments of sociological and philosophical articles.

The subversive spectacle showcases features of not the famous “Luncheon on the Grass”, but rather a luncheon on the street pavement. The performance combines [as in the puppet theater] animation features of the scenic elements of the table and the philosophical discourse, pondering the failings of modern civilization. It presents in a humorous way the distance between the elitist mentality in contrast with everyday life.

Akademia Ruchu Theatre was founded in Warsaw in 1973, with Wojciech Krukowski as founder and art director. Since the very beginning, it has been known as the ‘theatre of behaviour’ and visual narration. The group’s practice combines the disciplines of theatre, visual arts, performance and film, focusing on the shared qualities of movement, space and social message. This is connected with a sense that artistic radicalism and social meaning do not have to be mutually exclusive. Akademia Ruchu’s public-space work, pursued continuously since 1974 is the first example in Poland of such a systematic creative practice –outside the official institutional framework– in ‘non-artistic’ space: on the streets, at private homes, in industrial spaces. On the other hand, transferring elements of the everyday reality in unchanged form into the ‘holy’ space of art has served to enrich its anthropological vision without in any way impoverishing the aesthetic one. Akademia Ruchu has presented its work in almost all countries of Europe as well as in both Americas and Japan as part of tours and major theatre festivals.