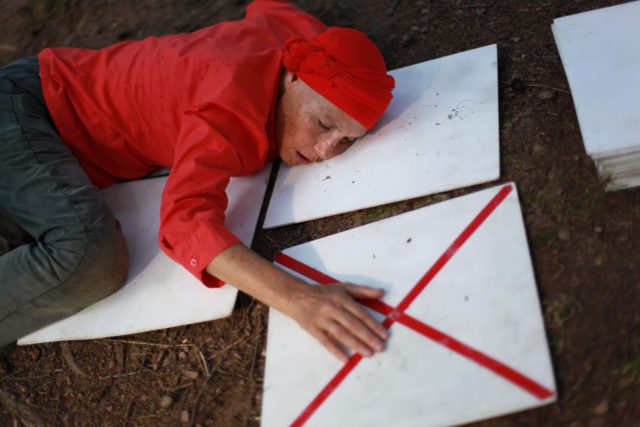 Adina Bar-On (b. 1951 in 1 in Kibbutz Kfar Blum, Isreal) pioneer performance artist.
Adina`s work holds a discourse about conflicts of identity and conflicting identifications. Adina has been an active performer since 1973, when she was a 3rd year student at the Bezalel Academy of Fine Arts and Design in Jerusalem.Over the years, she has presented her work in Israel`s major Art Museums and galleries. Making it her business to emphasize her political and social stand she has insistently performed in social and political events.
In recent years, she has been felt the growing urgency to channel her creative talent towards educational initiatives as well.The purpose of these educational initiatives have been to promote another way of discussion about Differences . The workshop under the title – Social and Cultural Manifestations in Art – has been an Alibi to organize workshops for Polish and Israeli Art students, Palestine and Israel Art students.
A partial list of the countries where Adina has been invited to perform and to teach are: Canada (Toronto), USA (NYC, Boston, Philly), Hong Kong, Japan(Tokyo, Nagoya, Negano), Germany (Kiln), N. Ireland (Belfast), Thailand (Bangkok, Chiangmai), Poland (Warsaw, Lublin, Krakow, Bialystok …), Russia (St. Petersburg), France (Paris, Quimper) .